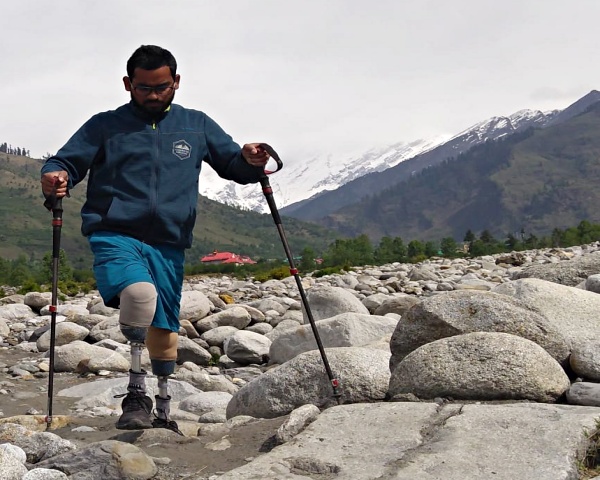 Double leg amputee mountaineer from Chhattisgarh Chitrasen Sahu leaves tonight for Tanzania to scale Mount Kilimanjaro. Chitrasen says he is undertaking the trek as part of a mission to promote inclusion and accessibility.

The 6,000-metre high Mount Kilimanjaro in Tanzania is among the world’s most popular treks for serious mountaineers. Climbing this dormant volcano means going through five extreme climate zones. Certainly not for the faint-hearted. Chitrasen Sahu aims to do it in six days, and enter history books as India’s first double leg amputee to do so.

Chitrasen is doing this under Mission Inclusion, a campaign which aims to send a message to authorities and the disabled community at large. He is also encouraging amputees to be proud of their prosthetic limbs under the campaign
Show Your Metal.

We want to change this attitude of sympathy and pity towards people with disabilities. The aim is to promote accessibility and tell authorities to give us the means to live like everyone else. I also want to tell people with disabilities to look at their prosthetic legs as a means of strength, not something to hide. These are some of the things I want to promote. – Chitrasen Sahu, Amputee mountaineer

Accompanying Chitrasen on the trek is Rahul Gupta, an experienced mountaineer. Rahul, who has scaled Mount Everest, met Chitrasen at a press conference in 2015 soon after he scaled Everest. Chitrasen asked Rahul to help him scale Everest. Rahul agreed, upon which Chitrasen pulled up his trousers displaying his prosthetic legs. Stunned, Rahul agreed to take him under his wings. This is the first time he has worked with a person with disability.

“Before attempting Everest, I want him to undertake other missions and that’s why we are scaling Kilimanjaro”, says Rahul. “I have made him do smaller treks for the last two years and there have been times he has injured himself badly, his prosthetic has even broken but he always came back, raring to go”. Rahul regards Chitrasen’s mission as a challenge. “This is more important to me, even more than my Everest climb”.

Together, they have been training at running tracks in Chhattisgarh and local mountains in Manipat. “I applied at the local mountaineering institute for training but they saw my disability and turned me down”, says Chitrasen. “There have been many roadblocks but I refused to give up and looked for other ways”.

An assistant engineer in the Chhattisgarh Housing Board (CGEB), Chitrasen was disabled in an accident in 2014. ”Before my accident, I was a fulltime sportsperson and played cricket, basketball, etc.” He continued to remain active after the accident and has been the force behind the Chhattisgarh Wheelchair Basketball Team, leading the state in national-level tournaments. He is also a Blade Runner.

Rahul says he wants to promote Chitrasen’s abilities to show authorities and the disabled community the immense potential they have. “Through Chitrasen, I want to show the world how much people with disabilities are capable of and give them a platform”.