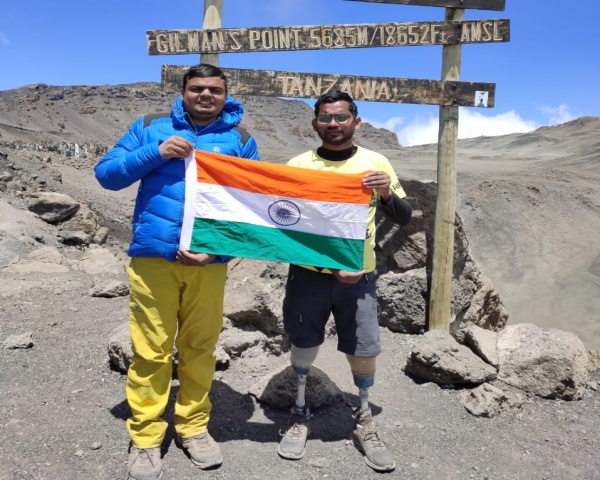 When the going gets tough, the tough get going. Blade runner and double leg amputee mountaineer Chitrasen Sahu truly lives up to that motto.

Chitrasen, who is from Chhatisgarh, braved sub zero temperatures, cold winds and slippery slopes to successfully scale Mount Kilimanjaro, Africa’s highest peak, located in Tanzania in six days. He is now officially the first double le amputee from India to achieve this feat.

Speaking to NewzHook after the climb, Chitrasen said the mission was tougher than he and coach and co-climber Rahul Gupta imagined.

It was tougher than we thought it would be, especially the last day of the climb when we had to face strong winds and temperatures below -5 degrees. The surface was very slippery too but we did not give up and kept climbing for 12 hours. I had blisters and an injury on my left leg but did not give up. – Chitrasen Sahu, Amputee mountaineer

Once at the summit, Chitrasen soaked in the experience. “When I reached the top, it felt awesome. I had mixed emotions. The first thing I did was remove my prosthetic leg, relaxed for a while, observing the mountains.. Then I hoisted the Indian flag”.
He also left a message for the two causes closest to his heart – Mission Inclusion and Plastic Free India.

No Mountain Too High

Through Mission Inclusion, Chitrasen aims to send a message to authorities and the disabled community at large and that is to find the ability in disability. He is also encouraging amputees to be proud of their prosthetic limbs under his campaign Show Your Metal.

It’s a passion and commitment that coach Rahul finds deeply inspiring. Rahul, an experienced mountaineer who has scaled Mt Everest, says he decided to coach Chitrasen after observing his attitude.

“The climb at Kilimanjaro was painful for Chitrasen due to jerks while slipping and when we finished the climb, I saw eight blisters on his legs. He is so dedicated to achieving hid dreams”.

Chitrasen, says Rahul, cuts an inspiring figure for the disabled community at large. “
Disability is just about psychology. You can find what you want if you are mentally strong. Chitrasen Sahu is a great example for society”.

Now the pair have set their sights on scaling Mount Everest. Kilimanjaro was a test climb ahead of the big one. It was also a great learning experience for them. “We have realised the importance of prosthetic management especially for a double amputee. Its amazing that Chitrasen completed his expedition with a basic level foot, which doesn’t support this type of activities. He needs a higher activity level foot so our focus is on lightweight prosthetics with a high activity level for snow trek”.