Blind cooks win hearts at a cooking competition in Agra 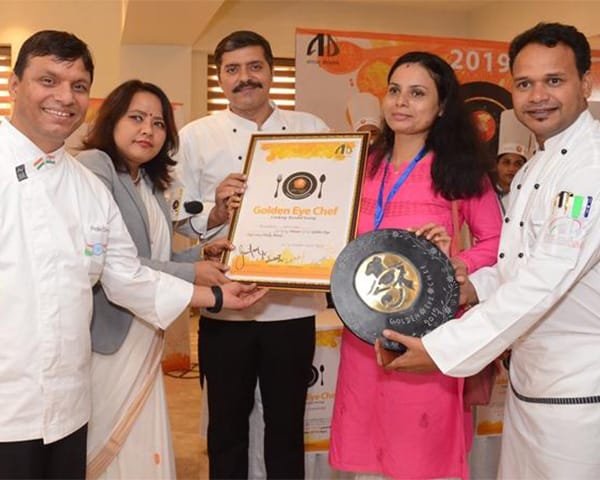 The historic city of Agra had recently hosted a unique contest that tested the cooking ability of chefs with visual impairments. Golden Eye Chef 2019, a three-day cooking competition saw the participation of blind and visually impaired cooks from across India.

The theme was Cooking Beyond Seeing and there were two categories, one for people who are completely blind and the other for partially blind people.

Participants were given tough challenges through the three days and the rules were the same as for a sighted cooking contest. They were given limited ingredients, cooking utensils, equipment and time, the only thing they were free to use was their imagination and cooking skills.

Arti impressed the judges with her wholesome cooking, flavors and knowledge about the various ingredients. In the final round, the main star ingredient was paneer and the contestants were given only a few utensils to work with. Arti’s crispy paneer rolls won the hearts of the judges and the first position for her.

I was nervous as the equipment and cooking process were challenging for a blind person like me but I went with my instinct. I am extremely happy that I won the contest as it will change the way people think of blind people. I am extremely thankful to the people around me who have supported me in my journey. – Arti Rukwal, Winner Golden Eye Chef 2019

Chef Kuldeep Singh, who is a part of the Jaypee Hotels Training Centre was one of the jury members. “When I got to know about the blind contestants, their talents and abilities amazed me. I am sure that the contest will change the mindset towards people with disabilities,” he said.

The competition was the brainchild of Akhil Srivastava from the NGO Antardrishti.

Akhil hopes to continue organizing such contests in the future as well to encourage visually impaired people and change the narrow minded assumptions of people about the blind community.