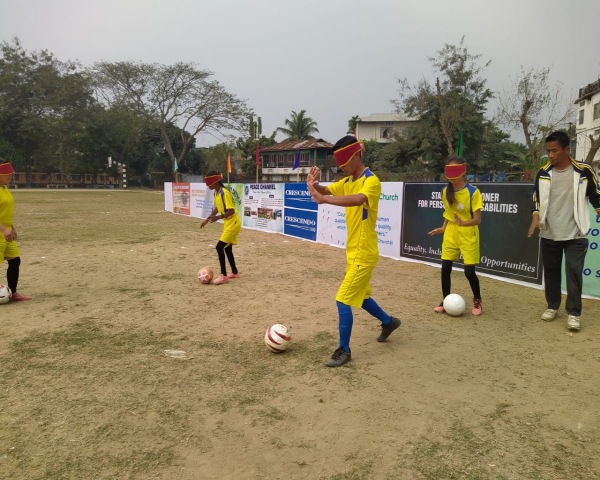 Blind football, popular in many parts of India, comes to Nagaland. The Indian Blind Football Federation conducted a first time training camp for blind footballers in Dimapur on 14 February. This will be followed by a demo game with boys and girls.

The first ever training camp for blind footballers in Nagaland kicked off to an enthusiastic start at the Don Bosco School Grounds in Dimapur on Friday. This was followed by the North East Tournament & League matches. The camp is being conducted by the Indian Blind Football Federation (IBFF) a voluntary organisation dedicated to promoting the game of football among the visually impaired community in India.

Camp to be followed by demo game

Blind football made its entry in the north east in 2016 and last year the IBFF organised a tournament for the region in Shillong. This is being organised in collaboration with State Commissioner Disabilities, Nagaland, Prodigals Home and Nagaland State Disability Forum.

This is the first camp in Nagaland and blind organisations have come together to make this happen. We are also organising a demo game for blind boys and girls. Two teams from Meghalaya will come for the demo game on 16 February. The aim of the demo game is to give local blind footballers an idea of how the game is played. – Sunil Matthew, Sporting Director, Indian Blind Football Federation

The IBFF is an independent body affiliated to the Paralympic Committee of India. It has been developing grassroots level blind football players and holding awareness camps across India. It runs the country’s only full-time Blind Football Academy at Kochi, Kerala.The Dimapur event will be officiated by national-level referees recognised by the International Blind Sports Federation (IBSA).

How blind football is played

Blind football is a fast paced 5-a-side match played by visually impaired athletes using a ball with a noise-making device inside. It is played on a smaller pitch in an enclosed court. There is more dribbling and short passing as compared to regular football and crowds remain quiet during play to ensure that players can hear the ball, their team-mates and opposition players.

Matches are played between two teams in a ground size of 40m X 20m, each with four outfield players and a goalkeeper. The outfield players are visually impaired and wear eyeshades to ensure fairness. The goalkeeper may be fully or partially sighted. The pitch is surrounded with a rebound wall. All players are blindfolded before a game so that this becomes a ‘level playing field’ for all players partial or fully blind.

“The aim is to get Nagaland to participate in the national blind football championships to be held in March 2020 in Guwahati”, says Matthew, who is widely credited with popularising the game. The national event will see 20 boys’ teams and 6 girls’ teams fighting it out. The northeast has a major presence in blind football. “The football fraternity is big here”, adds Matthew. “Even the national team has many players from this region and there is genuine interest in the game”.

The growing popularity of blind football, especially among girls’ makes Matthew happy. Last year, many new states like Gujarat took part in the national championships. He is hoping to take the blind girls’ team to the international championships in Nigeria later this year. “There is a lot of interest from blind girls. We allow partially sighted girls to play as well but with their eyes covered. India is the second country after Japan in Asia to have a blind girls’ team”.

The Nagaland camp is special as this is the first time that the State Disabilities Commissioner has shown keen interest in organising the camp.

“We have been hearing about blind football for a while now and we approached IBFF to organise a forum for blind football”, says Ashe Kiba, Secretary, Nagaland State Disability Forum. “For this camp, we have eight boys and eight girls. We strongly believe there is great potential and Nagaland will soon outrank other states in blind football”.

Words that make Matthew hopeful about the future of blind football. Few players receive any government support. “The government of Meghalaya is supporting some players but most of them come from poor backgrounds and cannot support themselves financially. We want to bring them out of their homes and show them what a beautiful game this is”.