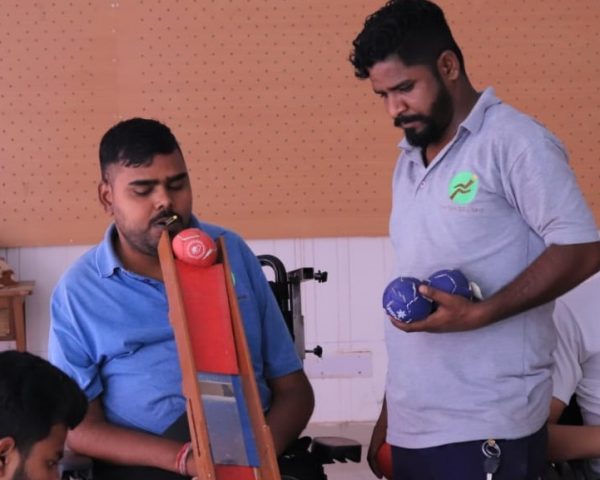 A bike accident left Ajeya Raj paralyzed from the neck below in 2006. The young man did not let this become a major setback and took full charge of his life. Among the many things he does, is play Boccia. Ajeya is a national-level Boccia player and will soon represent India on an international platform.

A Public Relations Officer at Chandigarh Spinal Rehab, Ajeya Raj has a remarkable story to tell. One that has seen him grapple with severe mental and physical challenges to reach a point where he feels in control of his life.

Ajeya was in class 10 when a bike accident paralysed him neck down. This was in 2006 and he has been using a wheelchair ever since. Today he can move his neck and perform many other tasks that otherwise seem impossible for someone with his medical condition. Ajeya also loves to paint and creates beautiful art, and spends a lot of time connecting with the world around him through social networking sites. He uses his mouth to operate his phone.

The turning point for Ajeya was coming to the Chandigarh Spinal Rehab centre from a small village in Jharkhand, where he lived with his family. Here, he was able to learn skills that made him feel more independent.

I was provided a motorised wheelchair and modifications were made so that I could use my mouth to operate it. Then I learned to use a phone and since then I have tried to learn new skills. Now I am working and that not only gives me financial freedom but also opportunity to help others like me. – Ajeya Raj, Boccia player

It is this desire to learn new things that led Ajeya to check out Boccia, a ball game specially adapted for disabled people.A Paralympic game, Boccia is a precision ball sport played by athletes with physical disabilities. It was originally designed to be played by people with cerebral palsy and is played by athletes with other disabilities affecting motor skills. There are 13 balls, six each of red and blue and one white in colour. Players have to try and put all their balls close to the white ball.

Ajeya uses his neck and mouth to play Boccia. He will be a part of the first team from India to play at the BISFED 2019 Dubai Boccia Regional Open.

Jaspreet Singh Dhaliwal, Coach, Boccia India feels that Ajeya has the potential to go far in the game. “Ajeya has played in several events and shown his potential. The game is still new to India and we are trying to create awareness about it in the disabled community so that more disabled people can learn about it,” says Jaspreet.

Ajeya is excited about the upcoming championship. “We will be competing with teams from other countries and it will be a new learning experience for me. Destiny has given me a chance to participate in the Boccia Championship in Dubai. Boccia is the only Paralympic sports which a person with my level of disability can play. I have got a chance to win an international-level Paralympic sports medal for India”.

Ajeya is a fine example of a strong grit and determination and nothing seems to stop him from reaching his dreams.