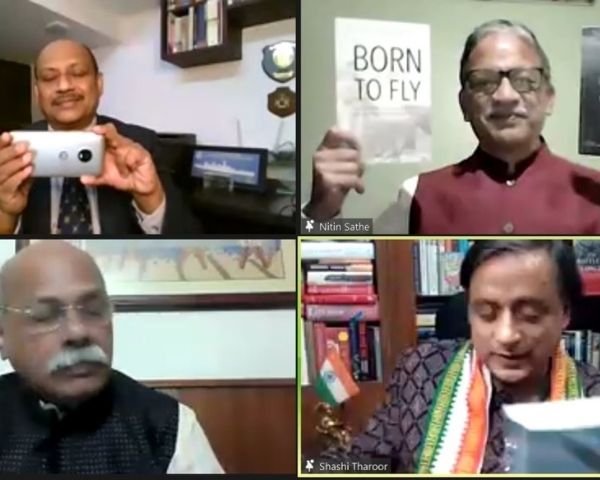 Popular book ‘Born to fly’, a biography of former navy pilot MP Anil Kumar who became a quadriplegic was translated into Malayalam with the name ‘Wheelchairil oru vaimanikan’. In the virtual launch that was done on 5 December by MP Shashi Tharoor, over 80 people from across the world participated.

The life of MP Anil Kumar, a former MiG 21 pilot in the Indian Air Force who became quadriplegic after a road accident has motivated many people. Thanks to his numerous writings that shared his positive views about life. Even after his death in the year 2014, Anil Kumar popularly known as MP, is considered an icon to many. ‘Born to Fly’, his biography was translated to Malayalam with the name ‘Wheelchairil oru vaimanikan’ by Joji Kunjattil . The launch was held on a virtual platform by Member of Parliament (MP), former international diplomat and writer Shashi Tharoor.

MP’s biography ‘Born to fly’ originally written in English by Nitin Sathe who was his course mate, takes readers through MP’s life journey. Born and raised in Trivandrum, Kerala’s capital city, MP completed schooling from the pioneer Sainik School. After passing out from the National Defence Academy (NDA), he joined the air force and soon became a MiG pilot.

One of the days, after winding up work, he was leaving the fighter base at Pathankot when he met with a bike accident. After spending days at Army’s Paraplegic Rehabilitation Centre in Pune, MP got back to life, but became a quadriplegic.

The world of literature helped him get back to his feet. He learned to write with a pen held in his mouth. His essay ‘Airborne to Chairborne’ which has been widely read is included in some school textbooks in Maharashtra and Kerala. MP was instrumental in counselling many people into defence careers.

‘Born to fly’ has already been translated to Gujarati, Marathi, and Hindi and also into Braille.

MP who succumbed to blood cancer at the age of 50 still lives as a legend.

At the virtual book launch, all participants, some of them who personally knew MP had only kind words to describe about his charming personality. Shashi Tharoor took to Twitter to share details about the launch.

“Launching the release of the Malayalam edition of Air Commodore Nitin Sathe’s #BornToFly, a remarkable book about MP Anil Kumar, a brilliant IAF pilot reduced to quadriplegia in a flight accident, who wrote brilliantly on a variety of issues”, tweeted Tharoor.

Ashla Rani from Trivandrum, a disability rights advocate who is a wheelchair user was present at the virtual launch. She says, “‘Born to fly’ is one of the most inspiring books that I have read. MP lived for 26 years on a wheelchair and motivated everyone around him. So the world needs to hear his story. All those who were at the virtual event were praising MP, some of them who were close to him. It was a day to remember”.

Over 80 people participated from different parts of the globe for the virtual launch.