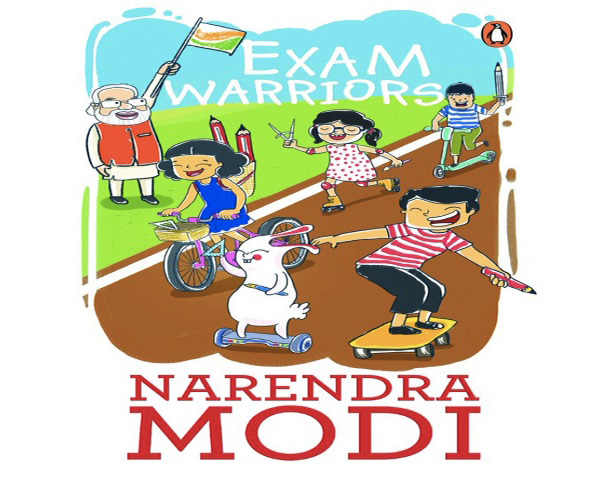 Braille versions of Exam Warriors, the book written by Prime Minister Narendra Modi, have been released. In the book PM Modi has valuable tips for students to deal with academic stress. The launch comes just ahead of the board exams.

‘Exams are like festivals, celebrate them!’, ‘Laugh In, Laugh Out’, ‘Be a Warrior, not a Worrier’. These are some of the  inspiring tips offered by Prime Minister Narendra Modi in his book Exam Warriors. The book is a compilation of advice and anecdotes offered to students by PM Modi in his radio show Mann Ki Baat.

English and Hindi versions of PM Modi’s book were released earlier this year. A Braille version of Exam Warriors was released last week by Union Minister for Social Justice and Empowerment Thaawarchand Gehlot.

Speaking at the launch, Mr Gehlot said millions of blind students in India would get motivation and mental strength from the Braille version of Exam Warriors.

The Braille versions of Exam Warriors have been prepared by the Braille Press of Rajasthan Netraheen Kalyan Sangh (RKNS). This Jaipur-based NGO brings out India’s first Braille newspaper in Hindi called Braille Samacharpatra. RKNS also publishes textbooks for blind schools of Rajasthan for classes 1 to 12.

It took us six months to make the Braille version of Exam Warriors in Hindi and English. We are a small team of four people and we need the help of one other person to describe the images for us. The book will be very useful for blind children, especially those who have missed out on early schooling and are not as confident. This will boost their confidence. There are many valuable tips here as well as specific asanas mentioned to deal with the stress and tension of exams. – J N Bhargav, Secretary Rajasthan Netraheen Kalyan Sangh

The release of the Braille version of Exam Warriors is timely as it comes just months ahead of exams for secondary and higher secondary classes. The pictures in the book have been well-described for the benefit of blind readers. Exam Warriors also encourages students to make the best use of time and energy after exams end.

“I have chosen to write on a subject that is close to my heart, and one that is fundamental to my vision for a youth-driven and youth-led tomorrow”, said PM Modi in a press release ahead of the launch of the Hindi and English versions earlier this year.