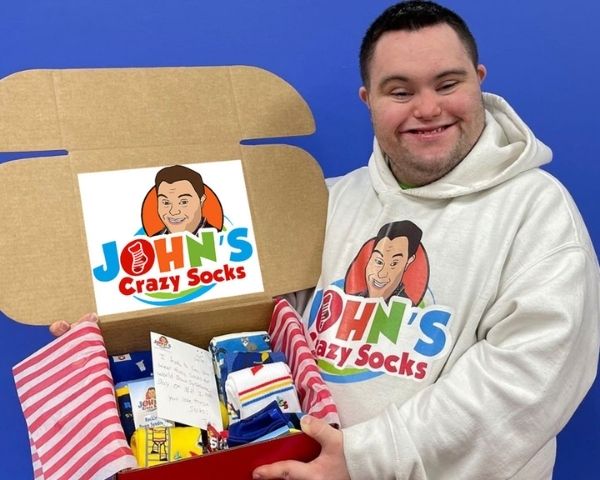 Employment April 26, 2021
John Lee Cronin was in high school when he hit upon the idea of starting a business with his father. That has grown into a multimillion-dollar enterprise called John’s Crazy Socks. This young business owner with Down syndrome is also a passionate advocate for the community. He has a team of over 20 employees with autism and Down syndrome and is the creator of innovative Down syndrome awareness campaigns.

In the fall of 2016 John Lee Cronin was in high school mulling over what to do next. Unlike many of his classmates, John’s career options were limited by the fact that he had Down syndrome; he didn’t find the job opportunities typically available to people with autism and Down syndrome exciting. Besides, John was clear he wanted to work with his father Mark Cronin.

“It was John’s idea that we should go into business together”, recalls Mark. “John was still in high school and that was his last year of school. Together we were trying to figure out what he would do when school ended. Unfortunately, there are not a lot of great choices for people with differing abilities”.

Mark was thrilled with the idea of starting a business with his son. They toyed with different business ideas, including cooking. Inspiration finally came from John’s childhood passion for colourful, unique socks and the.

Mark and John started small, with an initial investment of a few thousand dollars. In December 2016 the website of John’s Crazy Socks was officially launched. Some initial hitches aside the response from customers was encouraging.

John then had a brainwave; he decided to home deliver the socks in nearby areas with a handwritten note and candy. Everyone started talking about the young business owner with Down syndrome who had a unique, personal touch. The approach worked like magic and in many ways remains the cornerstone of the way this young businessman with Down syndrome functions, which is to combine quality products with quality customer service.

Sales shot up and in the first month, John’s Crazy Socks had 452 orders and over $12,000 in revenue. In 2018, the company reported close to 180,000 orders. A number of prominent customers supported John’s success as a business owner with Down syndrome like Canadian Prime Minister Justin Trudeau, former United States president George H.W. Bush and Eva Longoria.

The former president even honoured his late wife, Barbara Bush in a beautiful way during her funeral in 2018 by wearing socks designed by this business owner with Down syndrome. The socks were decorated with colorful books, a tribute to Mrs Bush’s commitment to family literacy.

Empowering people with Down syndrome, autism

Alongside Mark and John never forgot the challenges faced by the larger community. Apart from a successful retail enterprise, John is also a passionate advocate for people with Down syndrome, autism and other disabilities. John’s Crazy Socks is a social enterprise and currently employs 31 people. Twenty-two of them are people with autism and Down syndrome. Many of the disabled employees are Special Olympic athletes like John. John started competing with the Special Olympics when he was six years old, starting off in s soccer programme. Today, along with running a successful business, he competes in four sports – soccer, basketball, track and field and snowshoe. He is also a member of the Athlete Leadership Council for the State of New York.

“Without the Special Olympics, I do not think there would be a John’s Crazy Socks”, says Mark. “The Special Olympics helped John develop into the leader and entrepreneur that he is today. He learned discipline and how to work for a long-term goal”.

His success as a business owner with Down syndrome makes John acutely aware of the struggles disabled people faced when it comes to finding jobs. works closely with the local community to identify candidates with autism and Down syndrome who are a perfect fit for jobs at John’s Crazy Socks. He dedicates a considerable amount of his personal time to finding creative ways to advocate for people with Down syndrome and other disabilities.

We work with local schools, social service organisations and community groups. They learn about our business and the jobs here. Prior to the pandemic, we would host four to six tours each week from local high schools or social service agencies. That way, potential job candidates would get a first-hand view of the work here. In the work environment, we also hosted six work groups each week from high schools and social service agencies and that gave potential job applicants the opportunity to get a taste of what it would be like to work here. – Mark Cronin, Co-founder, John’s Crazy Socks

Entry level employees with autism and Down syndrome at John’s Crazy Socks work as Sock Wranglers. A person can receive as much training as he or she wants. At the end of this is the sock wrangler test. “This consists of picking six orders accurately in 30 minutes or less. When you pass the test, we offer you the position”, explains Mark. The test give the candidate the opportunity to prove he/she can do the job.

John’s Crazy Socks has socks in 2,000 different styles. Among the best-selling ones are those for charity and awareness. These include prominent Down syndrome campaigns like Rockin’ Down Syndrome Socks, and Down Syndrome Superhero Socks as well as Stand Up To Bullying. Two dollars from every awareness campaign sale is donated to the company’s charity partners. Five per cent of its earnings are donated to the Special Olympics.

Like many businesses, the pandemic hit John’s Crazy Socks hard. The company losing thousands of dollars in revenue. They were also forced to move in-person tours online. But this has translated into greater visibility for this business owner with Down syndrome. He now handles virtual visits from schools across the U.S and around the world. Mark and John have spoken at conferences in India, Spain, Portugal, England, Guyana, Mexico, and France. “Many of those would never have happened if we had to do it in person”, points out Mark.

John’s Crazy Socks has also expanded the range of products by adding face masks, which was also a tribute for frontline medical workers. “We created Healthcare Superhero socks that raise money for COVID-19 frontline workers. Those sock sales have raised over $50,000”, says Mark.

Apart from prominent campaigns to spread awareness, this businessman with Down syndrome also looks for ways to create happiness. John’s official title at John’s Crazy Socks is Chief Happiness Officer and every week he hosts an online dance party, where one can see up to 100 people dancing on Zoom at the same time.

Mark and John are working to change that situation. They use social media platforms like Instagram and their YouTube channel to spread the message that people with autism and Down syndrome are ready, capable and enthusiastic. They have advocated at Capitol Hill and testified before the House Committee on Small Business. John has also spoken to the United Nations about his own journey of the challenges of starting a business with Down syndrome and making a success of it.

Mark calls working with his son a “special pleasure”.

“John will stand in front of 5,000 people at a conference run by Microsoft and be the same young man when speaking with a class of middle school students. When our County Executive came to our office and presented a proclamation to John, John turned around and handed it to his colleagues saying, “you are the ones who did the work to earn this award, so you should have it.”

Click here to find out more about John’s Crazy Socks