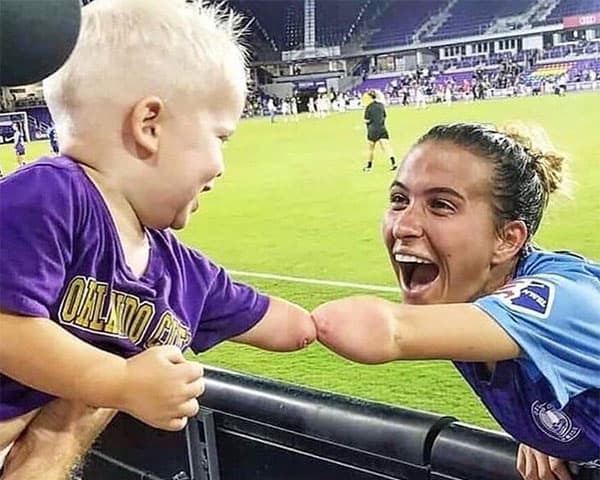 Toddler Joseph Tidd and soccer player Carson Pickett have a condition symbrachydactyly due to which their arm is not fully developed. A photograph of them doing fist bump at a stadium has gone viral with people around the world sharing this heartwarming image.

The Internet is quite a thing. People are now able to share inspiring things and photos through this medium. Those who are active on social media wouldn’t have missed a beautiful picture of one year old toddler Joseph Tidd and soccer player Carson Pickett which has won many hearts. Both of them have something in common. They were born without limbs.

In the image, Pickett is seen giving Toddler a fist bump on his limb. Take one look at the photo and you wouldn’t miss the instant bond and connection between Tidd and Pickett. The photograph has been widely shared on social media with millions of likes and thousands of people sharing it.

In the photo, little Tidd can be seen smiling with glee as he looks at Pickett who is full of excitement. Both Pickett and Tidd were born with a condition named symbrachydactyly due to which their arm cannot fully develop while inside the womb.

The photograph was first instagrammed by Tidd’s parents over a month ago. It was later spotted by 25-year-old Beckey Burleigh, Pickett’s coach and mentor, who re-posted the image on Twitter. The photo became an instant hit with over 38,000 people sharing it from Burleigh’s profile alone. “We need more of this in our world. RT to spread joy”, tweeted Burleigh. Crossing borders, this photo is already viral on the internet.

Recently, Piyush Sharma, a wheelchair musician from Bengaluru attended a concert in the city. A photograph of him being lifted on his wheelchair by fellow audience while a band played, had gone viral. The photograph showed how music transcends all barriers. Sharma says that this image of Tidd and Pickett becoming a sensation has a heart-touching message in it.

Now, it has become a trend to spread awareness about almost everything including a disability through social media. It is a great way to sensitise people and make them realise how important it is to look at disabilities as an inspiration rather than from a sympathetic point of view. It is also fascinating to see how there is a huge reach through internet. The impact is so deep that if the news is created and circulated rightly, it can create wonders in a good way. – Piyush Sharma.

The photo became very popular that they were aired in many TV channels across the world. Tidd’s father Miles who appeared in one of the show’s said that the Tidd and Pickett shared an instant bond. In fact, the soccer player knelt down to fist bump Tidd. Miles went on to add that they want their son to be inspired by Pickett who believes that she can do anything and work for her goals. That truly is inspiring!

Such images play a big role in changing perceptions, believes Pulkit Sharma, a wheelchair user and social media enthusiast. “I am active on social media. What I have felt is that, you need not feel awkward or shy to post a photo if you are a disabled person because many people get inspired from you. I feel it is also a way to know more about disabled people and break stereotypes. This photo portrays so many things and is so heart-warming”.