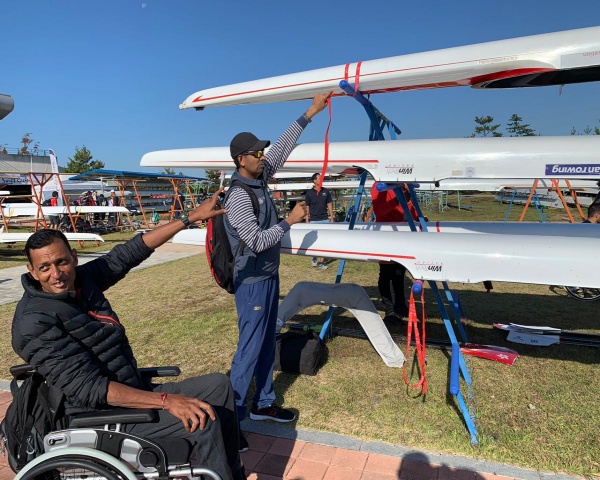 At the 2019 Asian Para Rowing Competition held in Cheongju, South Korea, Indian para rowers put up a good effort, winning one gold, two silver and three bronze medals. The event was special for another reason as well. Indian Air Force officer Wing Commander Shantanu made history as the first paraplegic Indian to take part in the event and was ranked fifth, pretty amazing for someone who took up rowing by chance.

With just five months to go for the 2020 FISA Asia and Oceania Olympic and Paralympic Qualification Regatta, Wing Commander Shantanu is back to training intensively. Its been just a few days since this Indian Air Force officer made history at the Asian Para Rowing Competition in Cheongju, South Korea as the first paraplegic Indian to take part in the event.

Wing Commander Shantanu did well given that this was his maiden event. He now ranks fifth in Asia and has qualified for the April event which will be held at Cheongju as well.

I started training for the event on 1 May this year so that was about five months of training that I put in. It was a great experience taking part in the presence of rowers from 21 countries. I got just one-and-a half days to practice with a lightweight boat and I could have done better if I had the time to get used to the boat, but I am not disappointed. – Wing Commander Shantanu, Para Rower, India

There are two categories in the para rowing championship – amputees and paraplegics. There were four Indians in the amputee category and Shantanu’s inclusion happened quite by chance, thanks to Colonel Gaurav Datta, Chairperson, RFI Para Rowing Committee. Colonel Datta, India’s only para triathlete, saw Shantanu, a national-level para swimmer, in the pool in early 2019 and asked him to try out for rowing. “I never imagined rowing would happen for me”, he says. “Colonel Datta saw me in the pool and noticed I could swim 800 metres in one stretch and had progressed very quickly in a few months’ time”.

Shantanu soon started training for the Korea event intensively and was fortunate to have the backing of the Indian Army. “When I told them I wanted to swim, they said go ahead. They were supportive when it came to rowing too. They have always encouraged me to come out of the hospital and live my life”, he adds.

Shantanu’s sights are firmly set on the April event. A gold medal here means he will directly qualify for the 2020 Paralympics. Ismail Baig, Chief Coach, Indian Rowing Team, who works with the para rowers, believes he has the makings of a champion.

“I work with all the para rowers. I am based in Hyderabad so I cannot train them directly, but I guide the local coaches who train the para rowers”. Shantanu, he believes, has the right spirit to succeed. “His disability is quite major but his determination to prove himself in life and sports is impressive. He works so hard to overcome the limitations his condition brings”.

Baig is especially impressed with the fact that Shantanu did so well without the proper equipment. “There are no boats available in India in this category and he did not have the proper equipment. I organised a boat for him with great difficulty with a. few parts that I had with me. I am sure that his performance will improve remarkably with a better boat. We should get a lighter boat that will help him”.

Hopefully, Shantanu’s performance in the recent event will attract the attention of sponsors and government authorities.

Also Read: Life does not come to an end on a wheelchair – Champion para swimmer Wing Commander Shantanu