#ChampionsWithCP – Cerebral Palsy has not dimmed their desire to shine 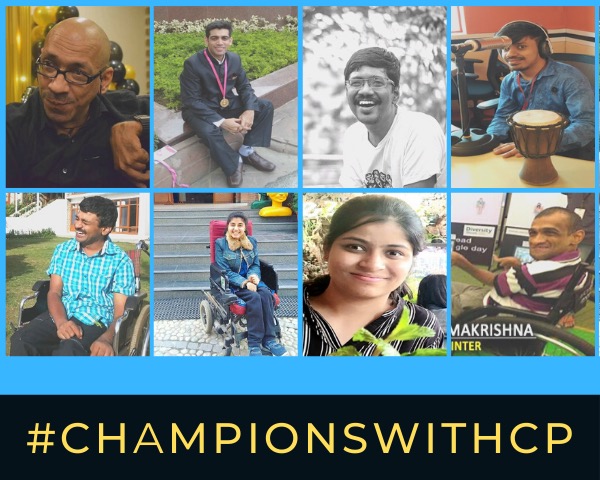 In our October campaign, we brought you stories of people across India who find everything to celebrate in life despite living with cerebral palsy. It’s a pretty amazing attitude given the lack of awareness about CP and the larger stereotypes about the condition. Have they allowed that to act as a barrier? No way.

The world reads CP as Cerebral Palsy but Dr Riitesh Sinha, a Karnal-based innovator, prefers to see it as Capable Person. An approach that has defined his attitude towards battling the various challenges that the condition brings.

There’s so much to bringing films alive on the screen. Great acting, direction, music, so on and so forth. Bringing them alive in words is well-known Malayalam film critic Paresh C Palicha. Did you know he loves movies so much that he worked a full-time job along side reviewing films, first day, first show?

People with disabilities have immense talents but few are willing to give them the opportunity to develop those skills and showcase them. Pramod Patil is out to change that with DivyangKala – A Talent House of Differently Abled People, an organisation he has started to promote sporting and creative talents of people with disabilities.

Just 19 years old Anushka Tiwari aims to make India a better place for people with disabilities. Now, if that sounds like a cliched statement to you, but do read her story. Diagnosed late by doctors, she has overcome some tough situations to grow into an independent young woman, who travels and lives by herself.

Delhi University student Shourya Sood shares Anushka’s dream as well. From commuting alone by the Delhi Metro to advocating for inclusion for college students, this young man is making a mark as a disability rights advocate.

At NewzHook, we love to highlight young champions of disability rights. A promising and articulate voice is that of Vinayana Khurana, a blogger and activist who refuses to let everyday barriers suppress her happy spirits.

From a lonely childhood with few friends to being the centre of attraction at work, Salesh Deepak has come a long way. A journey that is quote fascinating to read.

Rohit Jain made history when he was just eight years old as the first Indian with cerebral palsy to undergo a rare surgery successfully. That was the start of a career that has led him to be honoured by many well-known people.

Narayan Ramakrishna , the celebrated painter, continues to win praise for the extraordinary works of art he creates with his feet and mouth. This year he is a part of the jury at the India Inclusion Foundation that will screen the works of artists with disabilities.