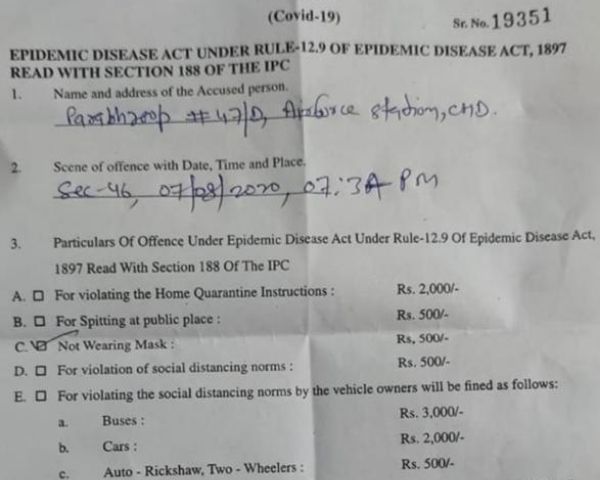 For the second time in a row, the Chandigarh Police is in the news for showing insensitivity towards people with disabilities. The latest incident is the move to impose a challan on a 19-year-old boy with autism for not wearing a mask while sitting inside a car.

Chandigarh resident Dilpreet Kaur Sekhon was returning home with her husband and son after a short evening drive when they were stopped by a team of the Chandigarh Police. They stopped the couple because their son was not wearing a mask. Dilpreet’s son, who is 19, was sitting behind and the couple did not notice that he had taken the mask off.

“We were inside Sector 32 close to our home when the police stopped us”, says Dilpreet. “They told my son to come out of the car because he was not wearing a mask”. Dilpreet and her husband, a medical officer, explained that the boy is on the autism spectrum and has a 90% intellectual disability.

“The police insisted on cutting a challan and asked my son to sign”, says Dilpreet. ‘When we told them he can’t sign given his disability, they insisted that we signed on his behalf”.

The Sekhons initially decided to move past the incident. Later, however, they felt they should raise this.

We decided to raise the incident with senior level Chandigarh Police officials so it doesn’t happen to other people with disabilities.The police should have understood that he is a special needs child and that when the police told him he should be wearing a mask all the time, he immediately wore it. He must have felt suffocated at some point and taken it off and we didn’t notice as we were seated in front. – Dilpreet Sekhon, Parent to child with disability

The Sekhons have narrated their experience on social media and written to the Chandigarh Police department that looks into the needs of children with disabilities. “We need to sensitise the police so they are more understanding towards others”, says Dilpreet.

Such incidents, says Shailja Sharma, a lawyer and parent to a child with disability, highlight the need to sensitise the police about disabled people.

“This just show lack of sensitivity and awareness on the part of the police”, says Sharma, who says she always carries her child’s disability certificate while traveling with him. “The Chandigarh Police is sticking to the rule book, which is that when a minor commits an offence, the parents are liable. But they could have just told him and giving a challan in the name of the child is not fair. This shows the need for awareness starting right up from the beat cops, SHOs to senior police officials”.

The overreach by the Chandigarh Police has drawn strong criticism on social media as well. Marry Barua, Founder, Action for Autism (AFA), said on Twitter, “The police were aware that the young man had challenges. They made the parent sign on behalf of the young man”.

Disability rights advocate Dr Satendra Singh highlighted similar concerns raised in the United States. “The Centres for Disease Control and Prevention recognises that wearing masks may not be possible in every situation for some people with intellectual and developmental disabilities, mental health conditions or other sensory sensitivities”. Adaptations and alternatives are required, he says.

Parent and disability rights activist Nikita Sara asks, “Because of my son’s sensory issues, he can’t wear a mask. Does that mean he never steps out?”

Questions that need to be addressed given that the new norms brought on by the coronavirus pandemic are here to stay. Instances like these show that while many people may have adjusted to this new normal, people with disabilities remain vulnerable on many fronts.