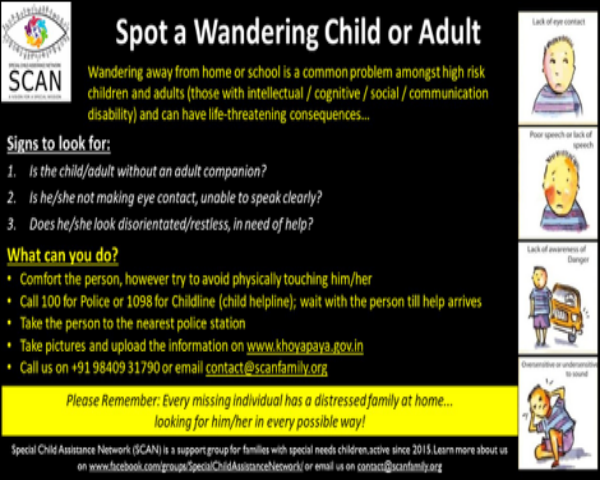 It’s been over two months since Tarun Gupta, a 17-year-old boy with autism, went missing. Social media has been flooded with images of the boy and appeals from his father seeking information. The incident highlights the high risk that children and adults with intellectual disabilities face of getting lost. To create awareness, Special Child Assistance Network, a Chennai-based parent support group, launched a campaign called Spot a Wandering Child or Adult with Disability on World Disability Day to sensitise the public. That’s the focus on #StoryOfTheWeek.

“Should I kill myself to wake up this system and government?”

These heart-breaking words from the online petition started by Vinod Gupta, are every parent’s worst nightmare come true. Mr Gupta is still frantically looking for his son Tarun. 17-year-old Tarun, who has autism, has been missing from his Mumbai home since 1 October.

The incident comes over a year after M Praveen Kumar, Chennai-based employee of Savera Hotels, went missing on his way to work. 26-year-old Praveen, who had an intellectual disability, did not board the bus he usually took to work. His family frantically searched for him everywhere but could not find him. The police did not do enough. The next day Praveen was killed in a road accident and his body lay unidentified in a morgue for two days.

Wandering away from home or school is a common problem among children and adults with intellectual, cognitive, social, or communication disabilities. While in most cases, they are found within a short of span of time and returned to their families, there are many who are never found at all.

Moved by these incidents, prominent Chennai parent support group Special Child Assistance Network (SCAN) has launched a public awareness campaign in the city. This will be done through a series of public messages and posters, initially in English and Tamil. The first communication was released on 3 December, International Day of Persons with Disabilities.

The intent is to make people aware of this danger, help people spot a missing child or adult with such issues, and give them tips on what to do when they see such a person who needs help. – Gopinath Ramakrishnan, Co-founder, Special Child Assistance Network

The campaign is the brainchild of Gayatri Sridhar, who is a special education teacher and parent to a child with autism. Gayatri says the aim is to awaken empathy in the larger society.

“As a parent to a child with autism, I have experienced moments such that when I needed to communicate most crucially with my son, there have been problems”, says Gayatri, who is also a trustee of SCAN. “This is particularly true in places like malls, etc. Take Praveen Kumar for instance. All that was needed was for someone to ask him his name, where he lived or worked, that’s it. This ‘communication blindness’ that people with autism and intellectual disabilities face, where they are unable to ask for help, is a major drawback in such situations.”.

In distress situations, it is not enough to simply give a biscuit or a glass of water and move on. “90% of people are positive and empathic, but there is a 10% that needs to be made aware of what they need to do”, says Gayatri.

Tarun and Praveen’s cases highlight what many parents of children with intellectual disabilities experience at some point or the other.

“About two years ago, a child from our group changed out of his night clothes and walked out of home at 6.30 AM”, says Gopinath. “The parents were asleep and woke up a little later to find their son gone. They didn’t know what he had changed into and couldn’t give a description either! He was found a few kilometres away thanks to a lady who saw a post about him on Facebook. She was dropping her child at the school bus stop and happened to see him.”

Part of SCAN’s campaign will look at precautions’ parents can take, which includes sensitising people working in the local neighbourhood. “Its not enough to make just neighbours aware because they will be inside their homes if your child goes wandering. It’s also about letting the local shopkeepers, vegetable sellers, temples, etc. informed. We have come up with a list of things families can do”, adds Gopinath.

Going ahead, SCAN plans to involve schools as well the police. They are also looking at how the police can use the biometric details captured in the Aadhaar cards to track down someone missing.

“We have an Awareness Agenda for the Lost Child Campaign”, says Gayatri.  This includes reaching out to: