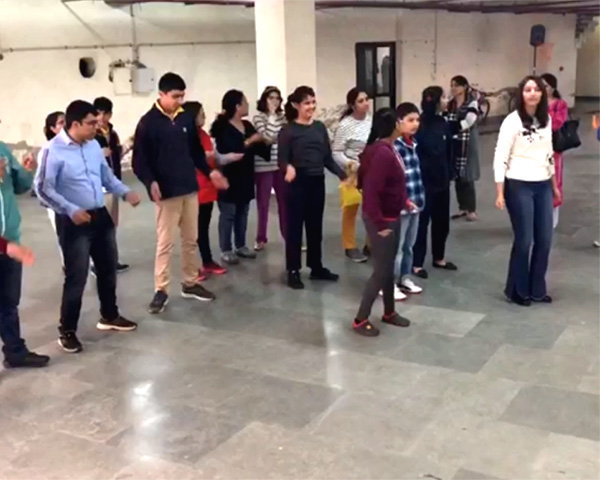 Music and dance are an integral part of our lives and have the power to change our emotions and reach beyond social barriers. Gurugram based Club Indradhanush is all set to use the magic of dance and music to spread the message of inclusion and acceptance. The children of the club are going to present a first of its kind Flash Mob performance.

To promote the cause of inclusion, children of Club Indradhanush will perform a unique Flash Mob at the Cyber Hub Mall in Gurugram, Haryana on 22 December.

A Flash Mob is a group performance where the participants gather suddenly at a public place and start doing the pre-rehearsed steps or choreography to the utter amazement of the audience. The Flash Mob has a huge element of surprise and the energy of the act tends to leave a very positive impact on the audience.

Around 50 children of Club Indradhanush will be performing in presence of hundreds of people at the Cyber Hub Mall. The aim of the initiative is to let the children be a part of a mainstream activity. Inclusion is not just about accessible public places but also acceptance and breaking of barriers that we have in our minds. The event is in keeping with the theme of  World Disability Day 2019 -“Promoting the participation of persons with disabilities and their leadership.”

Club Indradhanush is a social group created by parents of children with disabilities, the founding members are Astha Chadha, Pallavi Pathania, Rekha Rustagi and Renu Bakshi. The club provides the much needed platform to families to spend fun time together and participate in many activities and initiatives that are inclusive.

I always felt the need for a social club for our kid as we all like to go out meet people and make friends.  Celebrating festivals, parties with friends is as important for children with disabilities as everyone else. Through the club we really hope to create a social awareness about inclusion and ensuring that our children have a platform to socialize. – Astha Chadha, Founding Member, Club Indradhanush

At present the children are working hard on learning the steps and practicing them. A very peppy song medley has been created to make sure that the dancers enjoy the lessons. Aditi Bakshi, sibling of a participant is choreographing the act.

Pallavi Pathania is also a founder member and says that the idea behind the club is to provide a platform to the children and youngsters with disabilities.

She says, “We do not want the children to feel the pressure of societal expectations or fitting into a certain behavior. The children can just be themselves without being judged and compared with others and that helps them grow and be happy. As parents we had always been looking for such a platform and so we decided to create the club ourselves.”

“ Many people are not aware of the needs of the special children and at times do not know how to behave around them. We are hoping to change that and create awareness amongst others. The flash Mob will be a perfect activity to show that these children are just like others and enjoy little things in life like dancing and music and spending time with their friends ” Pallavi Pathania .

With a lot of Josh and Masti, Club Indradhanush children are getting ready to wow the people at the mall. Children with disabilities are part of the society and there is no reason for them to be left out of activities that everyone else is doing. Parents of the children and members of Club Indradhanush are all working together to bring about a change in the way people perceive disability. The dance performance by the kids will surely reach out to many hearts and help us accept differences.