The journey of Chrsitabell D’Cunha, a mother who empowered her two sons with disabilities 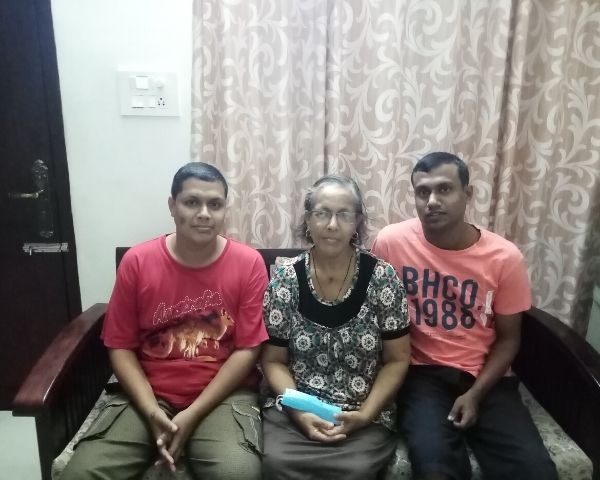 Christabell D’Cunha from Kochi is the mother of two youngsters with disabilities. Her son’s 31-year-old Grenville Philip D’Cunha and 29-year-old Gavin Joseph D’Cunha were diagnosed with intellectual disabilities at a young age, but they have learnt to become independent and supports their mother now. Read on to know more about the journey of this family amidst the many odds that they have come across in life.

Christabell D’Cunha has been through many hardships in life so that she could raise her two sons with intellectual disabilities. But this mother smiles at all the odds because that only makes her stronger. Christabell’s sons Gavin Joseph D’Cunha and Grenville Philip D’Cunha were diagnosed with intellectual disabilities at a young age. But they have learnt to become independent in their own ways. Read on to know more about the story of this hard-working mother who loves her sons beyond limits.

Christabell lives with her family at Vypin, a small town in Kochi. Her husband passed away at a young age, leaving their two sons to the care of Christabell. Since he had heart problems, Christabell used to spend a lot of time with him at hospitals. But things started to get extremely tough with financial constraints. Grenville was five years old and Gavin was three at that time.

After her husband passed away, Christabell had to find ways to support the family. Leaving her sons to the care of her mother, Christabell flew to the Gulf in search of better opportunities and landed the job as a teacher.

Meanwhile, Christabell’s mother started noticing certain behavioral changes in the brothers, but the family had no idea what was lying ahead.

A diagnosis for intellectual disabilities

Grenville and Gavin was then admitted to a convent in Kochi which had boarding facilities too. When Christabelle visited her sons during one of her vacation, the nun at the convent is the one who asked her to get both her sons diagnosed. After consultations with a few doctors, they said both her sons had learning disabilities. But it was later confirmed as intellectual disabilities.

“When I came to know of the final diagnosis, I was shocked and completely unaware of what intellectual disabilities are. But I was sure to empower them in my own ways”, says Christabell.

The brothers were studying at a special school called Anugraha in Kottayam for a while. When Christabell retired and returned back to Kerala, they all re-united and built a home together. “I always wanted to build a house for our own and we did that. Now, we are all living under one roof”, she says.

31 year old Grenville works as an office assistant at Raksha Special School in Kochi. 29 year old Gavin is also part of the school and mostly engages in vocational training. Grenville previously worked in a company, but dropped the job due to discrimination at work place. From a young age, Grenville wanted to work and live independently, and that is just what he is doing now!

An ardent dancer from childhood, Gavin loves to dance. He has participated in many events and also won prizes too. “Even as a child, Gavin used to participate in dance shows at our church. He loves it. At Raksha, he is an inevitable presence in all dance shows”, says a proud Christabell.

Gavin has tried his hands in carpentry, candle-making and paper bags making to name a few. Christabell hopes that she can give Gavin formal training in dance.

Both Grenville and Gavin has learnt to do things on their own now. They can even manage the house when their mother is not around. Christabell has a lot of support from her brother who stands by her through all odds.

Ask this mother for a message to other parents of children with disabilities and she says, “It is important to treat your child as a normal person. Never differentiate because each person has their own strengths. Never discourage them because if they can do it, they will do it”, says Christabell.