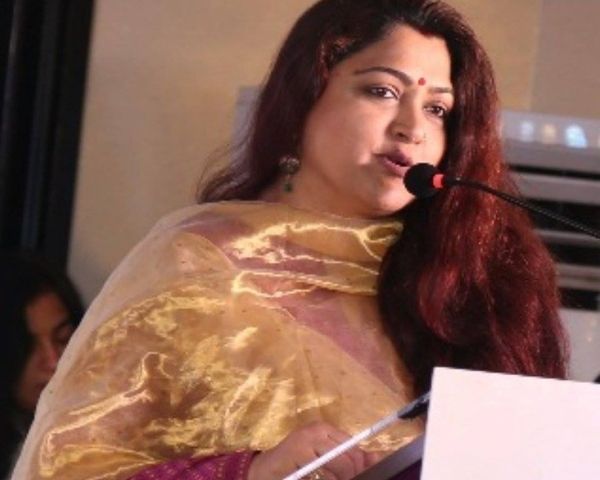 Online complaints have been lodged against actor Khusbhoo SUndar in nearly 30 police stationsfor her derogatory comments about people with disabilities. Many of these complaints are online. According to media reports, Khushboo, who joined the Bharatiya Janata Party (BJP) on Monday after quitting the Congress, said she has exited a “mentally retarded” party. Khushboo has apologised for her remarks but disability rights activists say this has come only after much pressure.

The Tamilnadu affiliate of the National Platform for the Rights of the Disabled (NPRD) has lodged police complaints in all districts of the state seeking lodging of FIRs against film actress-turned-politician Khushboo Sundar for insulting and humiliating persons with disabilities.

Speaking to the media on 13 October 2020 at Chennai airport, Khushboo used the term “mentally retarded” to attack the Congress party of which she was a member. She has left the party to join the Bharatiya Janata Party (BJP). The incident has been widely reported in the media and Khushboo has not denied making the remark.

In a statement, the NPRD has said that while Khusbhoo has every right to politically take on her opponents, usage of terms that invoke a negative portrayal of disability are “unacceptable”.

Time and again people holding public offices tend to invoke such negative terms to tarnish the image of political opponents, lending them legitimacy. This cannot be tolerated. The country and people like Khushboo need to be reminded that such insults and humiliation are also prohibited by law. – National Platform for the Rights of the Disabled (NPRD)

As per Section 92 (a) of the Rights of Persons with Disabilities Act, 2016, “whoever”, “intentionally insults or intimidates with intent to humiliate a person with disability in any place within public view” shall be “punishable with imprisonment for a term not less than six months but which may be extended to five years and with fine”. The Tamilnadu Association for the Rights of All Types of Differently-Abled & Caregivers (TARATDAC) is seeking registration of FIRs against her invoking these provisions.

“Proceeding against high profile people should act as a deterrent and would help in sending across the message that insult and humiliation of the disabled and their negative portrayal would not be tolerated”, said the NPRD.

Khushboo has apologised for her “incorrect use of a couple of phrases”.

“I have struggled with mental health concerns in my own family and have friends who are capable leaders, insightful and dynamic and living with bipolar disorder and depression. For their friendship and wisdom, I’m richer! Not just am I sensitive to diversity amongst people, but value it and have gained hugely from it. I realise that many leaders in the past have also made similar references and as much as I am disappointed by the inadvertent distress that I have caused many, equally I am now determined to ensure that I do not repeat this ever, whatever the motivation”.

NPRD General Secretary Muralidharan Vishwanath says this is not enough. ” While it may ebb the anger among certain sections who were agitated over her derogatory and insensitive remarks, the fact that she has violated a law that attracts a minimum of six months imprisonment, cannot be glossed over. And this was under pressure of the organisations and people whose voices found widespread resonance”.