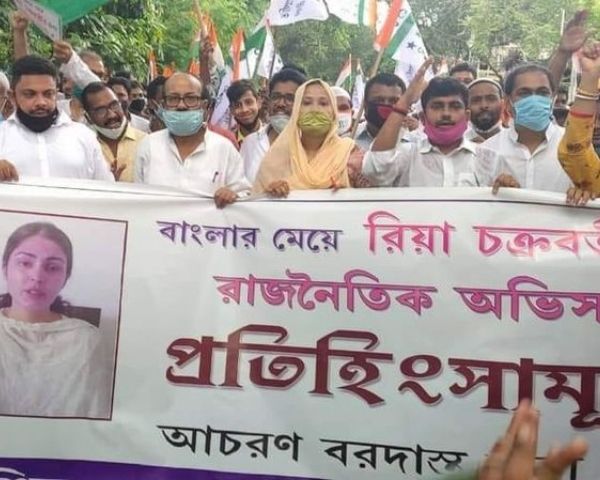 The Congress party at Kolkata, actor Rhea Chakraborty’s home state, has come out in support of the her who is currently in jail facing drug charges related to the death of actor Sushant Singh Rajput.

“Political conspiracy and vindictive behaviour against Rhea Chakraborty, the daughter of Bengal, will not be tolerated. The protest rally was taken out from provincial Congress office to Wellington junction on the instructions of Adhir Ranjan Chowdhury, president of the West Bengal Congress”, tweeted Congress.

In the rally that took place on Saturday, many Congress leaders and hundreds of people participated. They held placards calling Rhea the ‘daughter of Bengal’. Rallies were held at West Midnapore and West Burdwan districts as well. Congress openly coming out for Rhea adds to the political row in the case which had created quite a stir across the nation.

Rhea, who was arrested last week for procurement and usage of drugs, is currently at the Byculla jail in Mumbai. Rhea, her brother Showik Chakraborty and eight others have been arrested in the case. She was denied bail by a Mumbai court after which her lawyer is likely to approach the Bombay High Court. Reportedly, Rhea, upon questioning by Narcotics Control Bureau (NCB) had named actors Rakul Preet Singh and Sara Ali Khan amongst those who consume drugs in Bollywood.