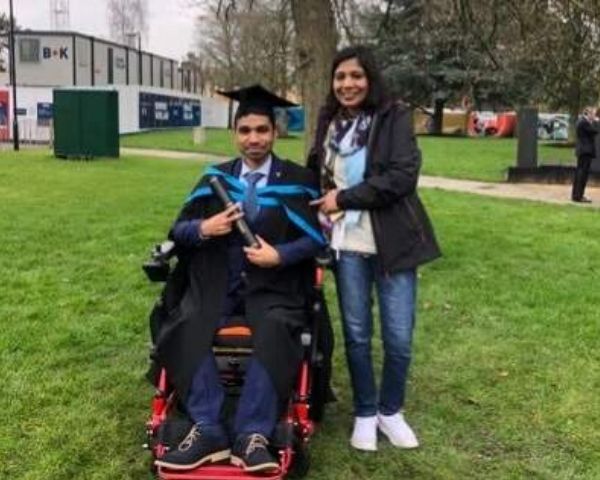 Ankit Agarwal, an Indian student with muscular dystrophy, has been stranded in the United Kingdom for over two months, unable to come home. After countless appeals on social media, authorities seem to have finally taken note.

If all goes well, Ankit Agarwal could be back in India within the next five days. Ankit, who is based in Ahmedabad, has been stranded in the United Kingdom since March when he finished his master’s degree.

Finally, after many social media appeals and newspaper reports, Indian authorities have taken note. In the meantime, Ankit even put his electric wheelchair, which he needs, on sale to be able to fund his extended stay and raise funds for two tickets back home.

I have received a letter from the Indian High Commission stating that me and my mom have been considered for the next scheduled flight on 23 May at 1.15 pm. The Air India manager at Heathrow Airport, London, personally called me and promised all possible help at the airport and thereon. She said miscommunication and lack of information on their part led to this situation, but that now it will not be an issue. – Ankit Agarwal, Indian student

It’s been a harrowing wait for Ankit who had registered to fly out on a London-Ahmedabad repatriation flight on 13 May. Three days before the flight Ankit was waitlisted when he should have been given priority given his disability. His mom, on the other hand, was shortlisted. Ankit has muscular dystrophy, which is progressive and causes loss of muscle mass.

“I wrote to them on e-mail and on Twitter on 10 May that my mom cannot leave me as I am in wheelchair”, said Ankit to NewzHook. However, while booking the ticket, Air India refused to provide him with an aisle wheelchair or assistance at London and Ahmedabad. “They said they could not due to social distancing and limited staff. I was told my mom would have to lift me into the flight”. When told it was impossible for a woman in her 50s to physically lift a grown man, Ankit was told he would have to walk to his seat and arrange for the wheelchair to be put into baggage as the crew is not allowed to do that.

Time and money was running out for Ankit. His visa expires on 31 May and his savings have run out. He tried to raise funds by selling his wheelchair on Twitter. “I had planned to stay until 26 March when I had a ticket to return to India but as the lockdown went into effect on 18 March I was stranded in the UK. I had already given my notice, so I had to beg everyone to extend my stay indefinitely as there was no information about repatriation flights”.

Put his wheelchair on sale to fund travel

Flight ticket costs have escalated as well to £596 (over ₹55,000) per person. “I thought the best way to raise £1982 (over ₹1,10,000) for two tickets was to sell my electric wheelchair”. He is relieved he no longer must do that but is anxious about what lies ahead. “There is no information with regard to accessibility at quarantine facilities nor have I been informed which facility I would be quarantined at”.

Today as the world marks Global Accessibility Awareness Day, Ankit’s story highlights the many loopholes that remain. Not only have his constitutional rights been violated, so have many critical guidelines of the Rights of Persons with Disabilities Act 2016 as well. “Sadly, this is not the first instance that I have been denied something that is rightfully conferred to me under the RPWD Act”, says this business analytics degree holder.

“Accessibility is something promised under the Accessible India which was supposed to have been achieved by June 2017, but we are yet to see that happen. I wrote so many letters to authorities but other than courtesy tweets from them, did not receive any reply for a long time”.