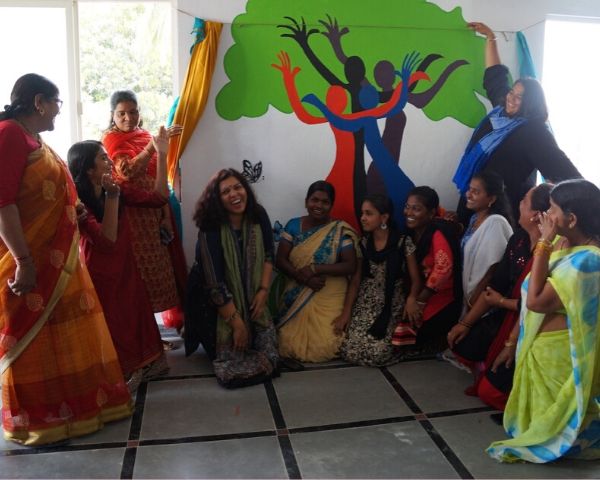 Since 2013 Craftizen, a social enterprise based in Bengaluru, has been working towards ensuring sustainable livelihoods for traditional artisans. Among its many initiatives is the Green Skilling programme which involves people with disabilities.

Until a few years ago, Natarajan*, who has a severe mental disability, depended on his father completely. Life changed when he became a part of Green Skilling, an initiative of Craftizen, a Bengaluru-based organisation working towards improving livelihood opportunities for artisans and crafts-persons.

When Mayura Balasubramanian founded Craftizen in 2013, the intent was to look for a meaningful way to support traditional artisans. “I found that while they were skilled, they were not connected to what consumers want and my idea was to forge that connection”. A National Bank of Agriculture and Rural Development (NABARD) fellowship set her on track to address this gap between the corporate and craft sectors. “One area was gifting and merchandise, but we also wanted to look at how companies could become modern day patrons and we were asked if we could skill the unskilled”.

Mayura decided to focus on people who don’t have access to regular skilled training and in 2015, Craftizen started its first CSR programme with Accenture called Green Skilling, which focuses on recycling discarded products.

Among its most popular initiatives is Petalists, which is a safer alternative to Holi colours. Temple flowers are recycled to make non-toxic, easily washable Holi colours, an initiative that has enabled nearly 300 people with intellectual disabilities. Petalists is also the name given to the team members. “It refers to our beneficiaries, persons with an intellectual and psychiatric disability who recycle flowers, and anybody who decides to be a part of this initiative”, says Mayura. The tagline – Spreading Happiness Through Flowers, is an apt one too.

We don’t work directly with people with disabilities. They come to organisations like NIMHANS and our NGO partners where they are at day care while their families are out earning. We did an assessment and found that they were being taught skills which are low margin and seasonal. They were not earning anything substantial. Today we work with temple flowers and make Holi colours, and there’s a big demand as people want to play an eco-friendly and safe Holi. It’s also beautiful that we generate so much colour. – Mayura Balasubramanian, Founder-CEO, Craftizen

Craftizen has many centres across Bengaluru, including one at the National Institute of Mental Health Sciences (NIMHANS). In 2015, NIMHANS started studying the therapeutic benefits of working with flowers for people with intellectual disabilities based on Craftizen’s experiences. “NIMHANS appointed a researcher to document our studies and this led to a report”, says Mayura with pride. Doctors at NIMHANS also recommend a few weeks with the Green Skilling team for outpatients.

Father Praveen from Orione Seva, an organisation working for the welfare of disabled people in Karnataka, says Green Skilling programme has benefitted many people with disabilities at their centres. “Ten women from our centres are working on the project and they make Holi colours and other products. They have formed a self-help group and are part of many activities that help them earn a living and socialise with the community”. Orione Seva collaborates with local wedding halls in the venture. “We collect flowers from the halls and there is work through the year”.

For Mayura, the biggest takeaway has been the change the programme has enabled in people’s lives.

Take 57-year-old S* who was diagnosed with chronic schizophrenia. At the time she joined the centre, S exhibited extreme behavioural issues that included hitting people and screaming. Gradually her behaviour changed and today she works on her own, segregating and de-petalling the flowers based on type and colour.

“The change to their self-worth has been huge”, says Mayura. “Working in the programme has given them renewed purpose”. She now plans to introduce a new skill and that is making using paper dust from cardboard-manufacturing factories along with flowers.

Visit the Craftizen website to know more about their work or to place orders.

*Names have been changed upon request.