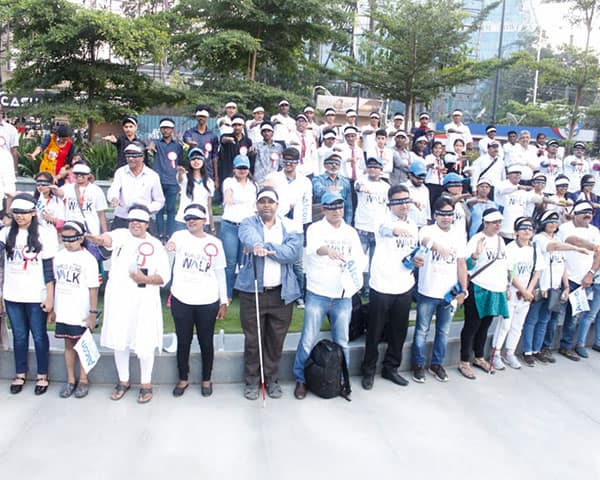 On 10 October marked as World Sight Day, ‘The Project Vision’ held a ‘Blind Walk’ in Bengaluru city which was attended by thousands of people from various walks of life. The event was organised so that people gets the feeling of difficulties faced by a blind person and also to create awareness about eye donation. This is their sixth successful year of organising the walk.

10 October was marked as World Sight Day, aimed to draw attention on blindness and vision impairment. Bengaluru based The Project Vision organised a Blind Walk in the city in their sixth edition. Thousands of people from across the city with and without visual impairments, participated in the walk which was a grand success.

The walk started off at St. Joseph’s College and ended at the Samsung Opera House in MG Road. All the sighted walkers were blindfolded and had to hold on to the shoulders of a blind person throughout the walk. Apart from creating the ‘feel of being a blind person’ and knowing their difficulties, the walk also created awareness on eye donation. which was the prime focus.

Sibu George, National Co-ordinator, Project Vision, says that most of the sighted people who participated in the event pledged to donate their eyes.

We are also creating ‘Vision Ambassadors’. The person who pledges their eyes must be able to donate it after their death and they must also be able to spread the message to other people in the society. They can work on this when they are alive and convince others to donate-Sibu George, National Coordinator, Project Vision.

Apart from Bengaluru, ‘Blind Walk’ was organised simultaneously in other metro cities as well. During their second year, they expanded it to places like Mumbai and Chennai. The next year, it was held across Indian cities and other prominent places across the world including Dallas in United States and countries like China, Sri Lanka and Nepal. “This year for our Bengaluru event, we started off with 500 people who walked blindfolded. But during the walk, we had more people join in and exceeded 1000”, says Sibu.

Spearheaded by Father George, ‘The Project Vision’ is one of the most successful initiatives in India that promotes awareness about eye donation. Their ‘Blind Walk’ is first of its kind in India and has also been awarded world’s largest walk. “We have a lot of supporters now. Since social media is also very powerful, we use the medium to spread our message”, adds Sibu.

Dr Jayanth Kumar, one of the founder members of Project Vision, is visually impaired.

“The initiative that comes under Eye Hope Society is aimed at creating awareness about eye donation. We did a detailed study and found out that there are a huge number of blind people in India who need cornea. In fact, their blindness can be regained if they get healthy corneas. That is why we want more people to step in and donate their eyes. We found this to be a noble cause in a country like India. Over 50 professionals from various walks of life started off this initiative”, says Jayanth Kumar.