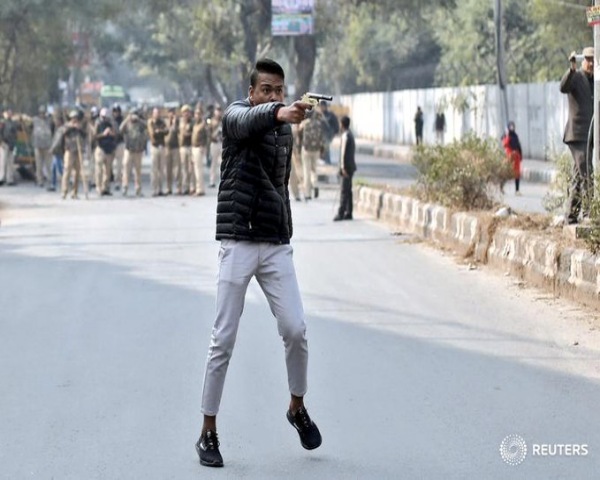 The teenage shooter who fired at protesters near Jamia Millia Islamia University in Delhi on Thursday has been charged with attempted murder. The 17-year-old is a class 11 student from Uttar Pradesh. He has been charged under the Arms Act.

The Delhi Police say he had bought the crude pistol a few days ago and had been planning to attack a protest against the citizenship law.

The shooter left his house in Jewar, outside Delhi, claiming he was going to school as usual. But he took a bus to Delhi instead. He came to the students’ protest at Jamia University against the Citizenship (Amendment) Act and mixed with the the crowd. Later he emerged from the crowd and pulled out a gun, shouting “Yeh lo Azaadi (here’s your freedom)“. Dozens of policemen in riot gear watched as he kept waving his gun at unarmed protesters and shouting threats.

The police have been criticised for their slow response. They have defended their actions saying the weapon was not visible.

Home Minister Amit Shah has ordered stringent action in the shooting incident and said “the culprit will not be spared”.

Thousands, including students in multiple cities and towns across the country, have taken to the streets since last month to protest the new citizenship law that they say discriminates against the minority Muslim community.