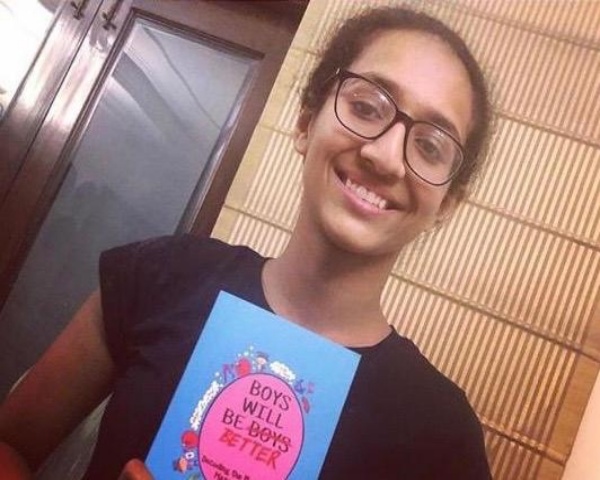 In an attempt to trigger deep conversations about gender and disability, Delhi Vedika Sharma has started a Safe Space Club where she invites youth to talk about concerns related to disability and gender. The clubs are held in her neighbourhood at accessible venues so people with disabilities can participate.

Just 17 years old, Vedika Sharma, a student of The Shri Ram School, Moulsari wants to change the stereotypes regarding gender and disability. Her determination to change traditional attitudes has led her to start a Safe Space Club, where young people from different genders and backgrounds come together to share ideas and experiences.

I have published my first book recently called ‘Boys Will Be Boys Better’, which is a collection of essays and poems that serve as a boys’ guide to feminism. To create further impact in my community, I followed this, with a Safe Space Club where we discuss various topics regarding gender equality and discrimination on the basis of disability. – Vedika Sharma, Author & Founder, Safe Space Club

Vedika, who studies at an inclusive school, says she was made aware of the need to include disability after hearing disabled students at her school talk about their experiences of being bullied. “When you witness so many instances of discrimination on the basis of gender, caste, and disability, you realise there’s a need to create a safe space where people can talk about their experiences freely.”

Five sessions of the Safe Space Club have been held do far, most of them in Vedika’s colony in an accessible area. Among those to attend was a student at her school who has Asperger’s syndrome.

“The conversation was about celebrating differences”, said the student, who does not wish to be identified. “All of had to write on a piece of paper whether we had been discriminated against for our differences. We didn’t have to share specific details, just a broad outline and how we felt about it. Later we all discussed how we felt, what we didn’t like about it.”

Most of the participants don’t know each other which helps with opening up freely.

“Initially it was hard and I was a bit hesitant”, said the unnamed student. “But the session definitely helped. I explained to them what Asperger’s syndrome was all about and it felt good because as an NIOS student in school I am in a separate group and don’t get to interact with a larger bunch of students”.

Vedika, who is a budding author, hopes to trigger a larger change in the world around her. Such sensitivity in someone so young is something to be celebrated.