Singer Devansh Chandra, diagnosed with autism, wants to build a career in music! 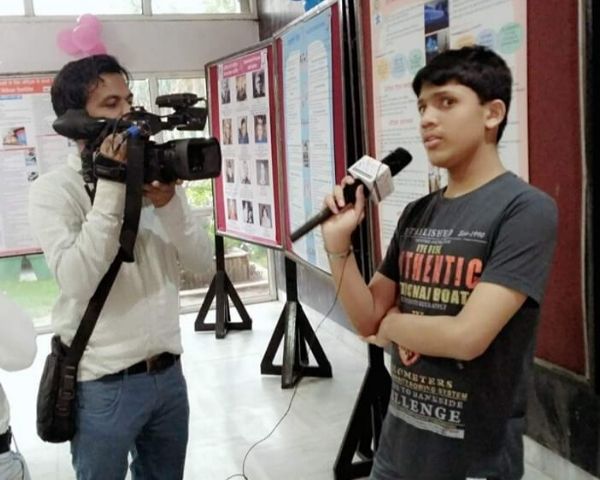 Devansh Chandra, 15 years old, was diagnosed with autism at a young age. Devansh lives with his parents Shweta and Divakar in Delhi. This youngster is a passionate singer who has performed at various venues at a young age. His love for music knows no boundaries.

15-year-old Devansh Chandra from Delhi is passionate singer who was diagnosed with autism at the age of two. He has performed at various stages and also hopes to build a career in music when he grows up. What made Devansh an empowered young man is the support and love he got from his family. Devansh’s mother Shweta and father Divakar worked with him for that. Shweta ensured that her son becomes an independent young man who can take care of his own things in spite of a disability. Read on to know more about Devansh’s journey.

Autism diagnosis at a young age

Shweta recollects that Devansh was a normal child till the age of one and half years, and that was when he had his first seizure. Soon after the seizure attack, he had high fever and was admitted to the hospital. Life changed for Devansh after the incident. He used to get up at nights and cry, something that became very common. Days were tougher for Shweta as Devansh lost the bond with his parents which he earlier had. This was something extremely upsetting for the family who were living in Patna during that time.

In Patna, there were no good therapists. An autism diagnosis for our son was something very shocking. I did not understand or know what his requirements were. It was my fault that I was completely unaware about autism. There were times when we thought autism was a disease that could be cured. We were running around and looking for doctors. It was like finding key to a lock. During that time, my husband got shifted to Delhi for work. Everything fell in place then- Shweta, Devansh’s mother.

Though Shweta had difficulties travelling long hours to the therapist with Devansh, she was determined to give her son the best treatment. So together, they used to travel in buses amidst the traffic to the best therapists in Delhi. Shweta says that it was one of the best decisions she made for Devansh.

Meanwhile, Shweta attended a few workshops wherein she learnt to work with her son to do therapies at home. She started occupational therapy, something that helped Devansh a lot. He was also picking up everything very fast. “There were many hurdles, but all that was ok to me as long as he started learning things”, she says.

Devansh was admitted to an early intervention center where Shweta used to go along with him. She did some volunteering and teaching work at the center so that she could keep an eye on Devansh. But things became sour as they refused to promote Devansh to higher class citing many reasons. They left the center.

Devansh is currently studying in class 7 at Balwant Ray Mehta School in the national capital. They have an exclusive group for children with disabilities and Devansh is a part of that.

Shweta remembers that Devansh was not vocal at the age of two, but used to hum songs. He was fond of listening to songs and that is something that always kept him occupied. This youngster used to pick up songs very fast. At the age of four, when therapies started, Devansh started singing a little more. That is when Shweta and her husband realized Devansh’s love for music. He started having a great time playing hand-drum and enjoyed every bit of it too!

Devansh has not yet received any formal training in music, but he has performed at many venues. Last year, he was invited to perform at the ‘Aaj Tak’ conclave, which was a memorable experience.

He has also participated in the talent hunt organized by All India Institute of Medical Sciences (AIIMS), a national event, where he won the first place. He has also been getting ample platforms to perform from school.

“We hope that Devansh can build a career in music because that is what he is best at doing. He also hopes to pursue that in future”, says Shweta.