Devanshi Joshi & her parents worked together for empowerment & independence 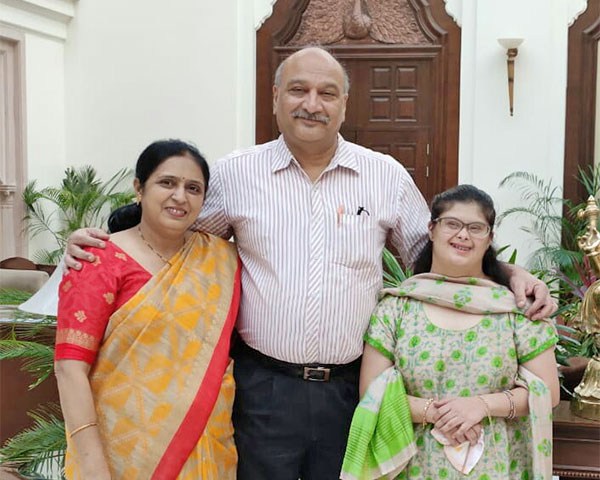 25 year old Devanshi Joshi is the ideal role model of determination and confidence. Her parents Anil and Rashmi Joshi ensured that Down syndrome does not pull back their daughter in life. Today, Devanshi is a young, independent and empowered young woman who shows the world that anyone can overcome a disability.

Devanshi Joshi’s journey towards being an empowered and independent young woman is truly inspiring and motivating. This 25 year old was diagnosed with Down syndrome soon after birth. Though her doctors gave up on her, Devanshi’s parents were determined on providing her with nothing less than the best. She has won many national and international accolades and has worked with some leading brands in New Delhi. Story of the Joshi’s prove how staying together as a family and inclusion from an early stage can do wonders to beat a disability.

Anil Joshi, Devanshi’s father who is an Accessibility Evangelist, works with a leading IT company in Delhi where he has been living since the year 2007. Ever since young age, he has been associated with NGO’s and social work. So he was already introduced to the disability space much before Devanshi’s birth. When she was born, Anil knew that he had to stay by her through thick and thin even when many others gave up.

Doctors told us that Devanshi is going to have some challenges. According to them, she could get clinical help but they were clueless about how to manage an intellectual disability. Both I and my wife Rashmi passed through some emotional turmoil as well. We decided to find out ways to empower her by networking with many other families. Since I lived in a joint family, I had the support of all my family members. We applied (systems) simulation model and also reached out to others for getting relevant information which helped-Anil Joshi.

Devanshi completed her class 8 in a regular school at Nagpur where the Joshi’s initially lived. She was awarded the best student for excelling in academics, sports and extra-curricular activities. “She used to write her own exams and get tuitions too. Anyone who has some patience can teach a child with disability. It is not an impossible task. Attending a normal school helped in overall personality development, daily living skills and also to increase self-esteem and confidence. Academic excellence was not what we put her in a school for”, says Joshi.

Devanshi completed her class 10 from The National Institute of Open Schooling. “She is in touch with all her school friends even today. Some are married, some have kids too. They all love interacting with each other”, adds Joshi.

When the family moved to New Delhi, shifting to a new place did not come easy for Devanshi. But the family stood together to ensure that she was comfortable in her new surroundings. In due course, she was introduced to photography, computers, dance and arts which opened doors of opportunities for her.

Devanshi used to volunteer at Dilli Haat which promoted arts and crafts. Devanshi participated in photography exhibitions at Hauz Khaz Village too. She started volunteering for mainstream exhibitions and Melas which boosted her confidence. Since she used to get paid, Devanshi realised that she can now become an independent young woman.

Soon, she started working for Gram Bharat where she learnt many new things. They recommended her for Stree Udhyami award due to her passion, relentless hard work and determination. She also won best employee award from the President of India in 2016, DSFI Award as Role Model in Sept. 2017, Helen Keller Award in 2017, and Delhi State Award in 2018.

Devanshi has also taken part in Special Olympics for Athletics including running and relay events at the national level. A motivational speaker, this young woman has attended many national and international events too.

Devanshi is also one amongst the first persons with a disability to get the voters identity card. Today, she works with leading company

Her mother Rashmi Joshi is equally excited and gleaming with pride when she talks about her daughter. “Today, after so many years, I feel satisfied that we could bring her up to become the strong woman that she is now. In fact, I have enjoyed this ride because it was fun and adventurous”, she says.

Also Read: Down syndrome is no barrier for this successful Mumbai hotel owner