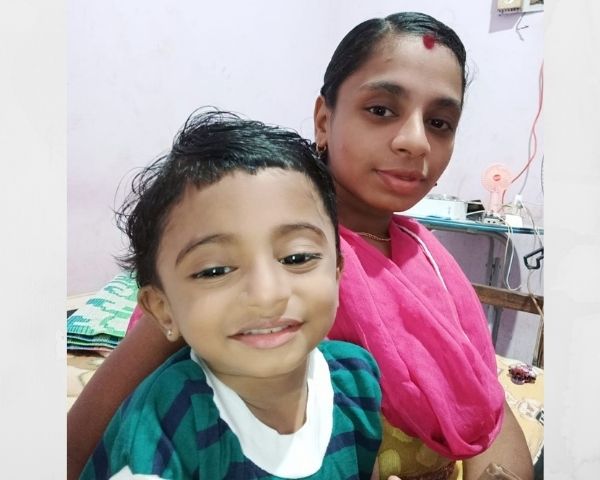 Dhanya, 32 years old, belongs to Varkala in Kerala and was diagnosed with Brittle Bone disease soon after birth. Her four-year-old son Akash is also diagnosed with the same condition. In spite of all the physical limitations and financial constraints, this mother-son duo is determined to make the best out of life.

Life has always been a bumpy ride for 32-year-old Dhanya from Kerala who was diagnosed with Brittle Bone disease. Dhanya hoped to see all her dreams through her son Akash, but soon after birth, even he was diagnosed with Brittle Bone disease which shattered Dhanya’s dreams. But in spite of all the obstacles, she is clinging on to hope and has not stopped dreaming. Dhanya wants to educate her son and build a house for her family so that they don’t have to stay in rented spaces.

Soon after birth, Dhanya says, her parents noticed the new born crying constantly which worried them. They immediately consulted her to doctors who took an X-Ray and told the parents that their daughter has Brittle Bone disease, also known as Osteogenesis Imperfecta (OI). Apparently, Dhanya had two fractures in her leg. Since they belonged to Varkala, a small town in Kerala, the family clearly had no awareness about disabilities and did not know anything about the path that lied ahead of them.

Dhanya, who belonged to a financially backward family, had no means to pursue higher education or avail facilities. So she completed class 10 and decided to join a convent to learn basic stitching, embroidery and other works. Being someone who uses wheelchair and walker alternatively, Dhanya says life was never a cakewalk for her.

“I don’t remember any discrimination that I faced due to a disability, but there were times I wished I had a normal childhood like others. I wasn’t allowed to go outside and play or couldn’t even go to school regularly due to my condition”, recalls Dhanya whose parents have always been supportive of her.

By the age of twelve, Dhanya had more than 35 fractures. She did many surgeries, but things are getting better for her health wise now.

Dhanya is currently engaged in doing embroidery works, stitching, and bottle-art. She stitches clothes for herself and her family as well. Someday, she hopes to start a shop where she can experiment with her skills and support her family. But right now, due to financial constraints, starting a shop is a distant dream.

Dhanya, who got married to Adarsh, a daily wage worker is leading a happy married life. But what aches her heart every day is that her four-year-old son Akash was also diagnosed with OI. “When I was five months pregnant, doctors told me that there is a high chance of my son also being diagnosed with the same condition. They asked me to abort the baby, but I was adamant on giving birth to him. Soon after his birth, he had fractures. I was shocked, but kind of prepared for what was laying ahead of me”, says Dhanya.

In a span of four years, Akash already had 15 fractures.

Dhanya is determined to not give up. She wants to make the best out of life for herself and her son. “It is important that parents support their children with disabilities. OI is a painful disease, but it is important to show your strength”, says Dhanya.