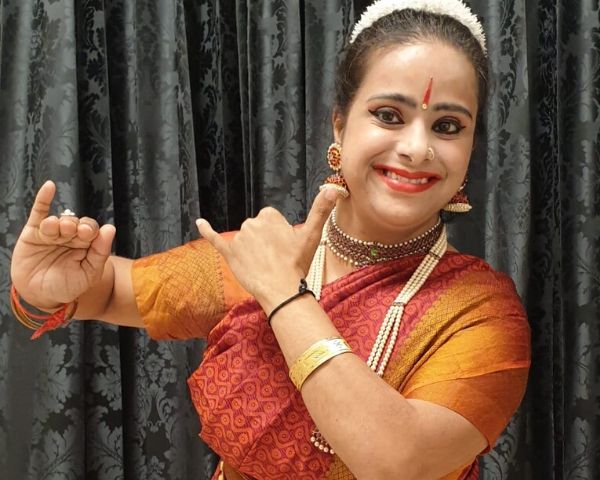 Throughout our March campaign #CelebratingDownSyndrome, we are featuring youngsters with Down syndrome who have made their mark with unique talents and hard-work. Today, we have Dhanya Vijayan, a 33 year old dancer from Kozhikode in Kerala. Dhanya, who is a trained classical dancer, is teaching dance for children with disabilities at special school at Kozhikode in Kerala. She is also a theatre artist and has big plans for the future.

Nothing can stop Dhanya Vijayan from chasing her dreams. Dhanya, who has been an ardent dancer since more than a decade now, is aiming for nothing lesser than the stars. This 33 year old youngster with Down syndrome is one of the few dance teachers with Down syndrome across the world. Dhanya has already performed at over 30 venues across Kerala. Her journey towards being empowered is truly inspiring.

When Dhanya was born, it was an occasion to celebrate for her parents Geetha and Vijayan. Just like every other parent, they were keen to watch their daughter’s milestones during her growing up years. But when Dhanya was around two, her family started noticing slow developmental milestones. At the age of four, her parents decided to make her undergo tests after which she was diagnosed with Down syndrome.

Initially, we were upset. Doctors used to tell us that her condition cannot be improved. But we decided to reach out to her and empower her in all possible ways which was one of the best decision of our lives. Today, she lives just like any other 33 year old woman, except for her slight speech impairment- Vijayan P, Dhanya’s father.

Vijayan P, who is a retired BSNL officer and mother Geetha are Dhanya’s biggest supporters. The family recollects that the support of Dr Shaji Thomas John of Kozhikode Down Syndrome Trust helped them in numerous ways. He has guided the family throughout all their difficult times.

Entering the world of dance

Dhanya studied at a regular school until class 10. After that, she took a break from academics. That is when this youngster started taking dance seriously.
Dhanya’s parents remember that she was a keen and enthusiast dancer as a child. She started learning dance at the age of ten. For twelve years, she learnt dance at the Natyadarpana Institute where Bharatanatyam was her main focus. After that, she learnt Mohiniyattam from the famous dancer Kalamandalam Sarawathi. “During one of her school events, she competed with regular school kids and got a first place in dance”, says Vijayan.

Currently, Dhanya is teaching dance to children with disabilities at the Thanal special school in Vadakara. She has also learnt computers, but dance is always close to her heart.

Dhanya is also a theatre-artist who has performed at various venues. “Dhanya is a hard working young girl who wants to follow her passion. She is devoted to dance. So even during shows, she doesn’t bother what the audience talks or discusses”, says Vijayan.

Vijayan says that understanding your child with a disability is important. “I always had a lot of support from around me. A disabled child can develop their own life if they are guided and supporter right”, he further adds.

“We have been doing regular speech therapies for her since childhood. But what is most important is that parents must accept their child’s disability, take them outdoors and let them live a normal life”, says Geetha.