Diagnosed with autism, paintings of 12-year-old Dhrov Tikoo are a treat to the eyes 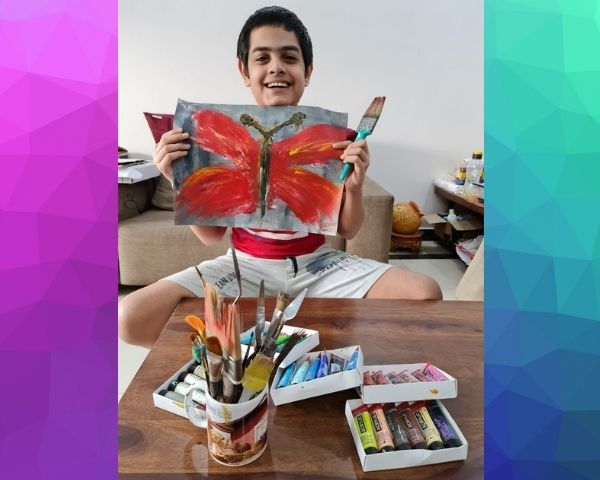 Dhrov Tikoo, 12 years old, is a budding artist diagnosed with autism. He has completed over 300 paintings and has also sold most of his works. His mother Kalpana Tikoo believes that identifying her son’s talents and nourishing them was the first step towards Dhrov’s empowerment.

For 12-year-old Dhrov Tikoo based in Delhi, painting is what makes him happy and satisfied. This youngster who was diagnosed with autism quite early is on the path to become an established painter. He has already completed over 300 works that have been sold to a happy clientele. He is too young to think of what he wants to do in the future, but his mother Kalpana Tikoo is sure that her son is going to achieve great heights in the field of art.

Dhrov wasn’t verbal though he turned over one year old. Moreover, he felt sick quite often and consultations with doctors became a regular thing. But by the age of one and half, Kalpana consulted an expert who diagnosed Dhrov with autism. “I was in denial for over six months. I was unaware about what autism is and like any other parent, was anxious and worried. In fact, I just wanted to hear someone say that he did not have autism. But I started therapies and early intervention quite early. All that helped Dhrov a lot”, recollects Kalpana.

Currently, Dhrov is studying in class 7 at Cambridge school in Srinivaspuri which is inclusive school. “Though he doesn’t interact much with other kids, he has a lot of support. The kids are also fine with him”, says Kalpana.

According to her, Dhrov’s love for colors started when he was two years old. She remembers how he used to be happy when he got sketch pens and crayons. “He used to throw colors around and loved watching them fall. It was therapeutic for him”, says Kalpana.

At school, Dhrov had a supportive art teacher who found out his talents and informed Kalpana. Soon, Dhrov was given materials and colors so that he could paint and he did a remarkable job with it to the wonder of his teachers and parents!

Though Dhrov has not undergone any formal training in arts, he studies a lot from YouTube. He likes painting using water colors, sketch pens, acrylic and pencil. Most of his works are a reflection of nature, especially different types of trees. His latest interest is abstract painting. He loves drawing little boys and girls too.

Dhrov has over 300 paintings to his credit and most of them have been sold. “We tell him that he will become an artist when he grows up and he has a smile on his face”, says Kalpana who believes that focusing on the child’s strengths is what every parent must do. “Every child is talented. If parents don’t identify that then who else will?”, she asks.

When Dhrov isn’t painting, he loves to dance and that is his second love. But according to Kalpana, most of the time in a day is spent on drawing and coloring.