From a Mercedes to a Nano, Rajesh Sharma had modified every kind of car. All that mattered to him was the person behind the wheel.

This philosophy was at the heart of this Jaipur auto mechanic’s commitment to ensuring that people with any kind of physical disability could drive.

Sharmaji, as he was popularly called, died a few weeks ago after he contracted coronavirus. The sudden death has come as s total shock to those who had the privilege of knowing him.

Among them is Dr Anita Sharma, Founder, Drive On My Own. This ex-Indian Institute of Management-Amritsar professor decided to dedicate her life to helping people with disabilities drive after she was paralysed from the waist down in a polio attack.

“Rajesh sir was the reason for my mobility independence”, says Anita. “He was a God-like figure for me who gave me wheels to move. I will always remember him whenever I will hold my car steering and hand-control system”, says Anita.

It was in 1995 that Mr Sharma, who owned a workshop in Jaipur, started modifying vehicles for disabled people. He had already become famous for modifying cars for driving schools by adding a clutch and brake to the co-passenger’s seat. In 1995 when an amputee customer reached out to him with a request, Mr Sharma took it up as a challenge. That started off what became a 25-year-long journey.

A journey that brought him into contact with an ex-army man, who went on to become one of his oldest customers and a close friend. The ex-Army man who was paralysed from the neck down while training at the Indian Military Academy. An adventure enthusiast, Mr Sharma modified three cars for him.

The ex-army man requires a specific type of vehicle that Mr Sharma was able to develop for him. “There is a particular design that I use as my fingers don’t work. I just told Rajesh that the clutch should be on the right side and he was able to do it”, he recalls.

That was the start of a long association that saw the two men get together and enable people with disabilities to drive, including a disabled person in Pakistan.

Someone from Lahore reached out to me for help with a modified vehicle, but I was not very sure if I could help. Rajesh insisted we should help and designed something that could adjust to the requirements and rules in that country. I got the vehicle sent across to Dubai and we did all this at no charge. Rajesh and I explained to was via video how to drive the car. – Ex-Army Man, Social worker & author

Newz Hook contacted the person in Lahore to speak to him about the difference Mr Sharma made to his life. “Before I found him and Bhai I was stuck at home for around five years. Rajesh bhai was a very courteous person. He not only talked with me but also asked me show him my car picks based on which he designed the control with such accuracy that I used the same control in three cars without any big modification. He was really an expert in his field. I will never forget him in my prayers”. 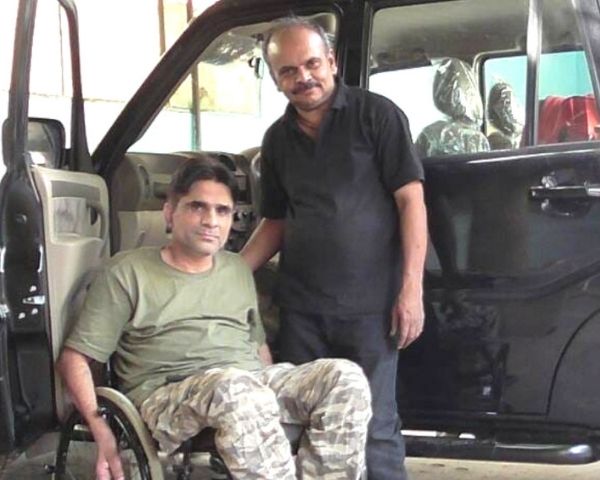 What set Mr Sharma apart was his genuine commitment towards enabling people with disabilities.

“People without disabilities don’t realise how empowering it is for a disabled person to drive, to marry or go on a holiday”, says ex-army man.“Rajesh, despite being non-disabled, saw that and empathised with that desire”.

Where other workshops charged as much as Rs 40,000-80,000 for modifying a vehicle, Mr Sharma charged just Rs 5,000. “Not just that he would come to your place and set it up for your whereas with others, you have to go to their workshop”.

No doubt his commitment and dedication will continue to bring many more people to his Jaipur workshop Anand Garage.