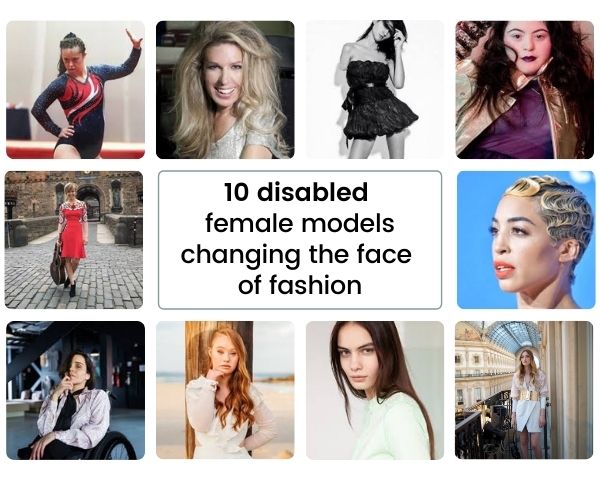 Get-hooked January 29, 2021
A growing number of women with disabilities are making their presence felt in the fashion industry worldwide. They are making a powerful statement, one that says all bodies are beautiful and worth designing for.

Insolera from Norway was born deaf. An entertainer from her early years, she has worked as a TV presenter, actor, clown, trapeze artist, and contortionist. In 2011, Insolera gave a show at the Copenhagen Fashion Week and has worked exclusively in the fashion industry in catwalks and photo shootings since then.

Being deaf says Insolera has helped her as she makes use of visual communication. “The deafness is an opportunity, an asset I would say. It enables me to reinforce my sight and my visual communication. I’ve always used it as a force element, kind of an advantage”, . Follow her @carolainsolera.

Born in Ilford, Essex, Ellie is a British model. She has Down syndrome and started modelling at the age of 15. Ellie is represented by Zebedee Management, an agency committed to representing models with disabilities and alternative appearances. Ellie has worked on campaigns for top brands Nike and Vodafone.

Ellie grabbed the world’s attention in 2019 when she was chosen by Gucci to model their beauty products. In an interview with British Vogue Ellie said, “Representation is very important to me — let the world see that anyone can model and act with a disability.”

Check out this video by The Valuable 500 where Ellie speaks about what inclusion means to her.

Mercado was diagnosed with muscular dystrophy when she was 13 years old. This is a condition that affects the muscles leading to spasms. Mercado always loved fashion but never found models like her. Her first campaign was with Diesel and she is now looked up to as a model and an outspoken activist for disability representation. She has worked on campaigns for Ivy Park, Beyoncé’s activewear line, and Nordstrom.

In 2018 Jillian met with the United Nations Secretary-General to discuss the organization’s efforts to address inequality – particularly among women and girls with disabilities. Follow her @jilly_peppa.

Kutas is the world’s first runway model in a wheelchair. Born in Ukraine, she started using a wheelchair after sustaining a spinal cord injury due to medical negligence during birth. In 2015 she took part in the Ukrainian Fashion Week.

“Ever since I began modelling in Ukraine, people’s perception towards diversity has changed”, says Kutas, who was an adviser to the mayor of a Ukraine city on the accessibility of urban infrastructure. “Brands like me after seeing my photos but the moment they see me on a wheelchair, they back out. I’m trying to break those barriers. With my passion and professional ethics, I’m as good as any other model even if I’m wheelchair-bound”. She is @AlexandraKutas.

What makes her such a breakout star? Watch this video by Kyiv Post –

Sheypuk was born with spinal muscular atrophy and has a Ph.D. in Clinical Psychology. In February 2014, Sheypuk became the first model in a wheelchair to “walk” the runway at New York Fashion Week, generating attention globally.

Listen to Danielle talk about sexuality and disability:

A former world champion in gymnastics Werner set her sights on the fashion industry after ending her career as an athlete. Werner, who has Down syndrome, loves being in front of the camera and has been featured on the cover of Teen Vogue. She has walked in the New York Fashion Week and done campaigns for big brands.

Werner loves being a role model. In an interview to Forbes, she said, “If I can help give any one hope that makes me very happy and proud!”

Watch Werner perform on the floor.

Barker is an artist, model and activist from California, United States. Her pixie style haircut and casual style of dressing set her apart on the modelling scene. Barker is a paraplegic with complex regional pain syndrome (CRPS), which is an extremely painful chronic disease. Her Instagram page gives expression to the activist and model in her. Her posts celebrate the world of fashion and challenge the way disabled people are treated. Follow her @celestial_LLC.

Stuart has also represented her country in cricket and basketball at the Special Olympics and performs regularly with Inside Outside, the Queensland-based dance school she founded in 2015 that caters largely for people with disabilities. Follow her @Madeline_Stuart.

This Dutch model also works in the tourism industry. Putten lost her right arm above the elbow in a bus crash in France. She was 19 years old at the time. That did not stop her from conquering the modelling world. According to her website, she was a contestant on “Britain’s Missing Top Model” in 2008 and has been featured in Cosmogirl, Elle and Playboy.

Danish model Nina Marker was discovered in a McDonalds when she was 16 years old. She has modelled for some of the world’s biggest brands like Chanel, Dolce & Gabbana and Stella McCartney. She uses her position in the fashion industry to raise awareness about disability.

Marker was 15 when she was diagnosed with Asperger Syndrome, an autism spectrum disorder. She faced many difficulties and speaks out about her experiences with autism on social media platforms.