Top 20 Disabled People With a Global Voice Everyone Must Follow 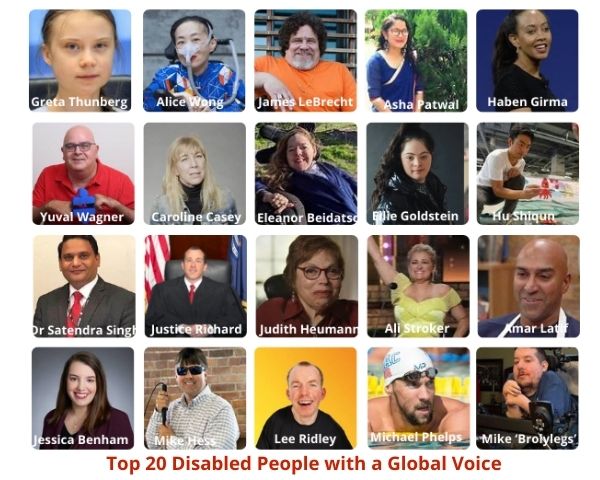 From advocates to artists, from lawyers and models, from doctors to judges, it is time to realise that people with disabilities are so much more! Here is Newz Hook’s list of the 20 Disabled People with a Global Voice you must follow.

Just 17, Greta Thunberg is a powerful global voice in the space of climate change. Greta, who is on the autism spectrum, has called out many world leaders and countries for not taking a strong enough position on the crisis. In response to her outspoken stance, various politicians have acknowledged the need to focus on climate change. Follow her on Twitter @GretaThunberg

Alice Wong, is the Founder-Project Coordinator of Disability Visibility Project, that collects oral histories of people with disabilities in the United States. Alice, who has spinal muscular atrophy, is also a strong voice in the advocacy space in her role as advisory board member for Asians and Pacific Islanders with Disabilities of California (APIDC). From 2013-15 she was the presidential appointee to the National Council on Disability, which advises the president, Congress, and other federal agencies on disability policies, programmess, and practices. Check her out @SFdirewolf

James LeBrecht was the toast of 2020 for the American documentary film Crip Camp: A Disability Revolution. The documentary has touched many hearts with its portrayal of a 1971 summer camp for disabled teens. LeBrecht has over 35 years of experience as a film and theatre sound designer and mixer. He linked up with co-director Nicole Newnham to share his experiences in the camp. Follow him @JimLeBrecht

“We are a tiny spark that can set the nation on fire”. These compelling words by Asha Patwal, deafblind student from Dehradun resonated the world over. Asha, 16 years old, was one of the top three winners of the United Nations World Data Forum contest in 2020. In her video, Asha made a strong case for the inclusion of people with deafblindness in the Census. There are over 6.5 million people with deafblindness in India and yet their presence is not reflected in the Census. Follow her story on @senseindia.

Asha Patwal has a role model to look up in Haben Girma. This American disability rights advocate has made history as the first deafblind graduate of Harvard Law School. Haben lost her vision and hearing in early childhood due to an unknown progressive condition. “I became a lawyer in part to help increase access to books and other digital information for persons with disabilities”, she says. Haben now works to change attitudes about disability around the world, including the development of accessible digital services. Follow @HabenGirma.

A former Israeli Air Force combat pilot, Yuval Wagner was paralysed in an air crash and became a wheelchair user. This brought him face to face with the lack of accessibility in Israel for people with disabilities. He started Access Israel, a non-profit that works for accessibility to people with all types of disabilities. The aim is to allow people with physical, sensory, mental and cognitive disabilities to live a full and active life with dignity, respect, equality, safety and maximal independence. He tweets @yuvalwag

At the age of 28, Irish activist Caroline Casey, who is legally blind due to ocular albinism, quit Accenture to launch Aisling Foundation. Her mission was to improve how disability is treated. With an aim to place disability as a central responsibility of any corporate agenda, she has launched Valuable 500, a global movement that shows how disability is a critical tool for business leadership. Her goal is to accelerate change to end the “disability inequality crisis”. Follow her @CarolineBinc

Palaeontology is not the only thing disabled scientist Eleanor Beidatsch is passionate about. She is equally driven about seeing more people with disabilities succeeding and being accepted in the world of sciences. Eleanor was born with Spinal Muscular Atrophy (SMA) Type 1, a genetic disorder that causes extreme muscle weakness and mobility impairment. Despite the complications of her disability and discriminatory attitudes in school, she relentlessly pursued her childhood dream of becoming a palaeontologist. “My success belongs to everyone like me”, she says. Follow her @EBeidatsch

British model Ellie Goldstein has caught the world’s attention as the face of Gucci Beauty. This 18-year-old with Down syndrome has always wanted to be famous and now she has the eyes of the world focusing on her. Ellie signed up with Zebedee Management, an agency committed to representing ‘models with disabilities and alternative appearances. Values that Ellie is determined to uphold. Follow Ellie’s career @ZebedeeMan.

Deaf entrepreneur Hu Shiqun is the founder of a Shanghai street art studio that specialises in 3D wall and ground paintings. All seven of the painters at his studio have hearing disabilities. He communicates with clients with typed words. Hu lost his hearing when he was a year old due to some medication. He started to learn Chinese calligraphy when he was 13 years old and became interested in art after seeing someone writing Chinese New Year’s couplets with a brush. His priority is to expand his business and employ more disabled people with a background in art training.

From accessible public infrastructure to fighting for equal opportunities for doctors with disabilities, Dr Satendra Singh never backs down from putting up the good fight. Doctors with Disabilities, the pan India body of medical professionals with disabilities he co-founded, has gone head-to-head with the government and top medical institutes to ensure that disabled students are not denied their rights to study or practice medicine. He has also fought to ensure that the MBBS curriculum is updated to reflect disability competencies. Follow him @drsitu

His campaign slogan was Justice is Blind and it is also a line that Justice Richard H Bernstein loves to repeat often. As the first visually impaired judge to be elected to the Supreme Court of Michigan in the United States, Justice Bernstein is a strong advocate for better opportunities for people with disabilities. He has used his legal experience and acumen to fight for better access to buildings, public spaces, transport and jobs. Follow his YouTube channel The Blind Judge

Activist Judith Heumann is recognised internationally as a leader in the disability community. Her work with governments and NGOs has led to significant contributions to the development of human rights legislation and policies for children and adults with disabilities. Judith had polio when she was 18 months old and has used a wheelchair for most of her life. Her activism was shaped by her personal experiences which included fighting repeatedly to be included in the educational system. Judith has been featured in numerous documentaries including on the history of the disability rights movement. Check out her powerful words @judithheumann

Alyson Mackenzie Stroker is an American actress and singer. She is the first actress who uses a wheelchair for mobility to appear on a Broadway stage. Ali was two years old when she was in a car accident that led to a spinal cord injury. The accident left her paralysed from the chest down. In 2018 she won a Tony Award for Best Featured Actress in a Musical, making her the first disabled person to be nominated for and to receive that award. Check her out on Instagram @alistroker.

Amar Latif was 18 years old the he lost his sight due to an incurable condition but that hasn’t stopped him from travelling and striating his own business. Amar is the first blind person to take part in the prestigious cooking competition Masterchef. He competed against 10 other celebrities and made it all the way to the semi-final. Amar is also the founder of Traveleyes, a company that helps blind and visually impaired people explore and experience the world in their own way. You can follow him @AmarLatif.

All eyes are on Jessica Benham who made history in 2020 as the first person on the autism spectrum to be elected from Pennsylvania on the Democratic Party ticket. Benham is the only lawmaker with autism in the US and she is the co-founder of the Pittsburgh Center for Autistic Advocacy. She has also made history for being the first bisexual woman to be elected to the legislature. Follow her views on @jessicalbenham

US-based entrepreneur Mike Hess is the founder of the Blind Institute of Technology an organisation dedicated to creating an attitude shift for blind professionals and educating companies on how to hire and cultivate success for visually impaired people. He believes that his blindness has helped him become a successful engineer. “I describe losing my sight as an inconvenience, nothing more! I’m married, I’m a father to three children, I’ve competed in martial arts, I ski, climb mountains and I’ve had a successful 20-year career in the tech industry”, he says. Follow him @BlindInstituteT and on LinkedIn

Lee Ridley was disabled in early childhood due to a neurological form of cerebral palsy that left him unable to speak and affected his movements. He is the first stand-up comedian in the United Kingdom to use a voice box in his routines and performs under the stage name of Lost Voice Guy. He shot to fame after winning the Britain’s Got Talent in 2018.

A lot of Ridley’s material centres on disability. “I’ve got 38 years’ worth of material about my disability, so I’d be silly not to use it,” he said in an interview. “If I didn’t laugh about my situation, I’d most definitely cry.” Follow him @LostVoiceGuy

With 28 Olympic medals, Michael Fred Phelps is the most successful and most decorated Olympian of all time. He also holds the all-time records for Olympic gold medals in individual events. One of the sources of his incredible success comes from being ADHD. In his memoir No Limits: The Will to Succeed, he talks about he found his comfort zone in the swimming pool. “In the water, for the first time, I felt in control”. Follow Phelps @MichaelPhelps

Mike Brolylegs Begum was born with arthrogryposis, a condition that restricts joint movement and inhibits muscle growth, as well as scoliosis, an irregular curving of the spine. He has made his name as one of the most notable Street Fighter players in the world, becoming the world’s number-one ranked Chun-Li in Ultra Street Fighter IV. He plays all of his games using only his mouth on the controller. He has been playing video games since he was two years old.

“I challenge people and I go to tournaments and people look at me, thinking “this is going to be an easy win,” and then I just prove them wrong and I beat them”, says Mike. Follow him on Instagram @brolylegs

Do follow these inspiring global figures on the disability space to truly understand how disability in no way defines ability.