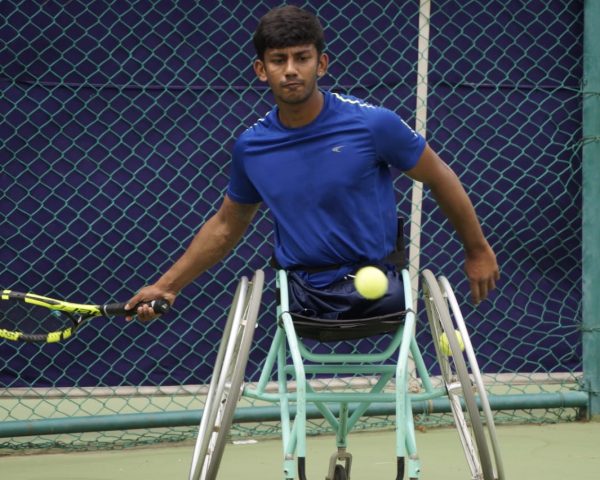 In our August campaign #IStandIndependent on emerging para sportspersons, we feature Madhusudan H from Bengaluru. Madhu, who is a wheelchair tennis player, has won many accolades in national and international championships.

Until he was 13 years old, Madhusudan H took no interest in sports. Oddly enough it was an accident where his knee was amputated in 2001 that led to his developing a passion for wheelchair tennis. He met some players and decided to learn he game.

Today, at 24, Madhu has already taken part in five international tournaments across four countries, even winning a silver medal in the 2014 Bangkok Open Wheelchair Tennis tournament. He has also represented Karnataka in more than six national tournaments.

As a kid, I was never really interested in sports. I had attended a graphics designing class right after my class 10 and that is where I met some wheelchair tennis players who introduced me to the game. I got really inspired after watching them play, and they gave me detailed insights into the sport. I even became a regular in watching wheelchair tennis tournaments

Madhu who also works in a private company in Bengaluru ensures he keeps up with regular tennis practice. He says sports makes him feel great and enhances his self-esteem and confidence.

Like many sportspersons, Madhu too faced difficulties in the early years. He would practice on weekends but commuting all the way from home to the sessions was hard.

“I had to travel at least 18 kms to Cubbon Park where my practice sessions used to happen. That means, I had to shell out at least ₹ 400 on every auto trip just one way. It was too much expense for me. Though it was only on weekends, it was an extra burden to spend money with the kind of income that I was earning. Soon, I started asking people on my same route to pick me up. Some kind-hearted people agreed, and I could save on money”, says Madhu.

Now that he bought his own bike, Madhu is able to move around freely and attends practice sessions easily. Then came the expense of playing the game. Tennis is an expensive sport and he struggled to put together the expenses. He believes that struggles like these discourage many talented sportspersons.

“There are many wheelchair tennis courts in Bengaluru, but none of them agree to take in wheelchair tennis players. They say that wheelchair tyres leave a mark on their ground. Nothing is accessible for disabled people. Since government is not even stepping up to help us, we are forced to take care of expenses for travel and purchase of sports equipment’s”, adds Madhu.

Currently, he is being supported by the NGO Bangalore Schools Sports Foundation due to which he is able to go ahead with his games smoothly. “There is a dearth of wheelchair tennis coaches too. Regular coaches do not know the basics of wheelchair tennis and it is technically different”, he says.

For five years, Madhu has been rigorously practicing wheelchair tennis without missing any weekend sessions. He says his determination to pursue the game amidst all odds and love for it is what pushes him ahead in life. According to Madhu, the emotional support from his mother to pursue his game is the biggest support.

Madhu’s determination, says strong>Shivprasad S, Vice-captain of Indian Wheelchair Cricket Team, is his biggest strength. “I know Madhu for the last three years and he has a bright future as he is constantly keen to learn new things and improve his game”.

As for Madhu, his focus is on 2020. “My biggest dream in life is to represent India in the 2020 Paralympics. For that, I want to stay positive, work hard and make it happen”.