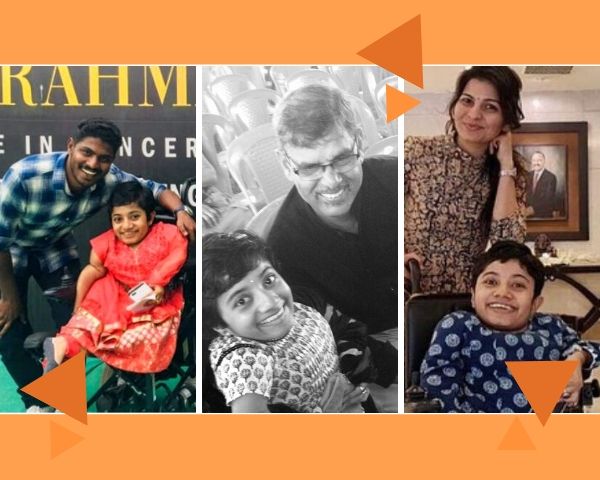 30-year-old Dhanya Ravi from Bengaluru was diagnosed with Brittle Bone disease when she was young. Dhanya is a popular social worker who has reached out to the disabled community in many ways. In our monthly feature #FriendshipGoals, Dhanya’s friends talk about what makes her a unique personality.

30-year-old Dhanya Ravi needs no introduction. With her charismatic smile and healing touch in the lives of many people, Dhanya has made her mark in India’s disabled community. Dhanya, who is a wheelchair user, was diagnosed with Brittle Bone Disease at a young age. She currently lives in Bengaluru and is a writer, motivational speaker, digital marketer and social worker who also runs an NGO called Aasman Foundation.

Needless to say, Dhanya is very popular amongst her friend circle too. Her friends from different age groups point out that the magic she has created in their lives in different ways. Today, Dhanya’s friends Baby KS, Bobby Joseph, Rosemary and Arjun Som shares about their beautiful relations with her.

Dhanya and her friendship with 67 year old Baby KS is unique and beautiful. Baby remembers the first time he met Dhanya when she was hardly nine years old. Baby used to run a business very close to where Dhanya stayed in Bengaluru. Once, she visited the shop with her father. It took them only a few minutes to get along and create a bond for a lifetime.

“I met her in the early nineties. The first thing I remember about Dhanya is her long hair that she had during that time. Then I noticed her smile that was as beautiful as glass bangles clinging under sunshine! The next day when I did not see Dhanya I enquired to her father who told me that she had Brittle Bone disease. Then, I exchanged numbers with Dhanya and we used to regularly keep in touch over the phone”, says Baby who remembers how Dhanya used to sing to him Malayalam songs as a child. “Those were the days we bonded. I still have the same affection towards her”, he smiles.

Soon Baby’s family also grew fond of Dhanya. His children too are now Dhanya’s friends. “My family members still say that I and Dhanya have a connection from previous birth. She is a friend and daughter to me. I love the fact that she knows the answer for any question that you ask her”, says Baby.

Their friendship grew thicker, fonder and deeper over the years. Baby moved from Bengaluru to Kerala, but they still keep in touch. The best part is, both of them can discuss about anything under the sky.

Dhanya’s 56-year-old Bobby Joseph has only the best things to tell about her. They have bonded over the years and stood by each other always. “She is unique in her own way, very motivational, self-confident, and positive and a go-getter. I believe these are characters that most of us lack. Our friendship has been unique from the time I met her, something that words cannot describe”, he says.

Friends for a lifetime

Rosemary who is a psychologist is also the co-founder of NGO Aasman. Dhanya and Rosemary met through a mutual friend almost three years back. Rosemary says that she knew she had an in-depth connection with Dhanya after watching her on a TV show where Dhanya came as the guest. She soon added Dhanya on Facebook and their friendship took off from there. In fact, since both of them were in the same city, they met on the same day they started talking.

“I can talk to her about anything and she understands me like no one else does. I can say that Dhanya is my backbone, someone who inspires me to do better. My day begins and ends by talking to her over the phone. Never have I felt that she is someone with a disability and her knowledge about things have surprised me”, says Rosemary. Ask her what she likes best about Dhanya and Rosemary says, “She never judges me. I’am very straightforward with her”.

Rosemary also recollects how she missed her when Dhanya had gone to the USA for six months. But they kept in touch through video calls.

Arjun Som also came to know about Dhanya through the same TV show. They have known each other for five years now. “I love the fact that Dhanya looks at the positive side of everything. All these years, she has not changed a bit. She might look like an extrovert, but is someone who is very private and leads a quite life. We haven’t met in a while because Dhanya is now in Kerala and I’am at Bengaluru”, he says.

An ideal friend to all

On this upcoming friendship day, Dhanya has no plans to spend time with her friends due to lockdowns and Covid-19 pandemic. She knows that her friends are always there for her, no matter how far they are. Distances do not matter.

“Many people believe that friends need to be there for each other, but I feel neutral about it. You can be there or not but any friendship with my friends is divine in its own way. Friends are someone with whom you can talk about anything. That means, even when you are having a bad day and yells at them, they must understand that and stand by you. So that way, I’am lucky to have some great people in my life. Every friend of mine is different and they share a different space in my journey”, says Dhanya.