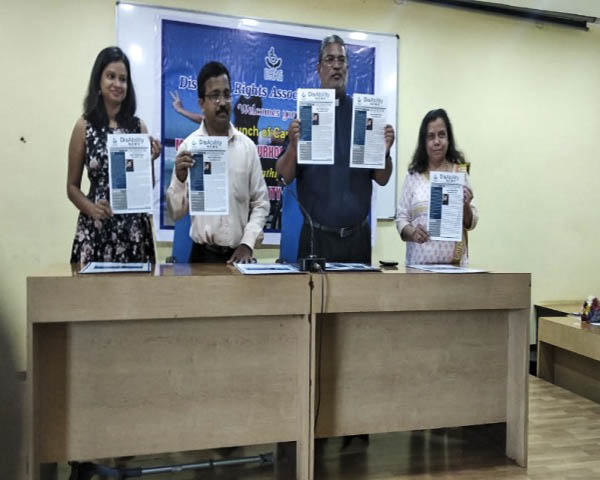 The Disability Rights Association of Goa (DRAG) has launched a campaign called Make my Neighbourhood Accessible 2020. The aim is to create greater sensitisation about making the immediate surroundings accessible so people with disabilities can be a part of the world around them.

Over three years after the Rights of Persons with Disabilities Act 2016 came into effect, public places are still far from accessible to people with disabilities. This is coming in the way of equal opportunities for the disabled community. To create greater sensitisation regarding this, the Disability Rights Association of Goa (DRAG), a leading organisation in the space in the state, has launched a campaign called Make My Neighbourhood Accessible 2020.

Campaign aims to make RPWD Act a reality in Goa

The campaign was launched in Panjim and speaking on the occasion Avelino de Sa, President, DRAG, emphasised upon the need to make the RPWD Act a reality.

LACK OF ACCESSIBLE INFRASTRUCTURE ACTS AS BARRIER FOR DISABLED

The RPWD Act mandates that all existing public places, including private sector-owned spaces, have to be made accessible within a period of five years of the notification of the Act. That means two more years to ago. If this is not done no occupancy certificates can be issued.

“I appreciate the efforts of DRAS and congratulate them for highlighting the responsibility of society towards making the neighbourhood accessible for disabled people”, says Father Maverick Fernandes. He hopes that places of worship will take heed as well. “Religious places of all religions must make their buildings accessible to persons with disability as it is their fundamental right to worship”.

A newsletter with articles written by disabled people has been started by DRAG. This is called DisAbility News and will be released twice a month.