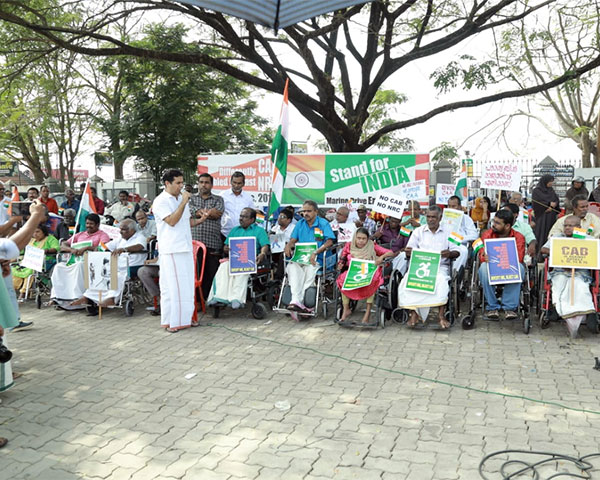 On 24 December, a group of wheelchair users from Kochi came together to protest against the National Citizenship Amendment Act. The event received a lot of attention. Over hundred people with disabilities participated in the event that was held at Kochi Marine Drive.

Over the past few weeks, there has been rising incidents of protests across India. This was after introduction of the National Citizenship Amendment Act which created a lot of controversy. Disabled people in Kochi also came together to protest against the central government’s latest act. On 24 December, over hundred disabled people participated in the protest that was held at Marine Drive in Kochi. The event was inaugurated by Congress leader and Member of Parliament Hibi Eden who also spoke at the protest.

The citizenship bill proposes to undermine all the values of Indian constitution. The new amendment proposals are against secularism and democracy enshrined in the constitution. Central government is trying to divide the citizens of India who are living in peace and co-existence. This is a different manifestation of the protests.

Most of them were people with visual impairment and wheelchair users. According to the protestors, the citizenship act violated the basic principles of the constitution. This in turn would disrupt the peaceful environment of India and alienate its own citizens.

All the disabled people were members of different NGO’s across Kochi. The event lasted for over four hours. All the protestors beat the extreme heat to show their support for minorities in the country who are reportedly going to be targeted after implementation of the bill. “All the protestors had only one cause on mind. They wanted to the bill to be removed at the earliest. The event was a grand success. We got a lot of national attention as well. By protesting, we want to spread the message of uniting the country. We only carried a national flag and placard”, says Rajeev Palluruthy, disability rights activist from Kerala.