Person with disability gets a new lease of life, thanks to Tamil Nadu Chief Minister’s prompt response 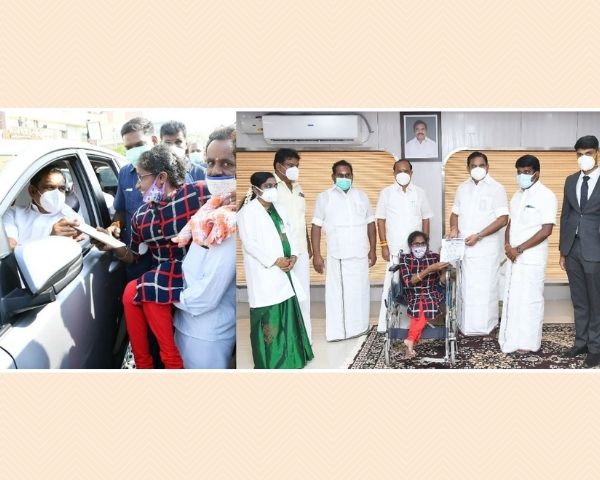 It was a regular working day for Tamil Nadu chief minister Edappadi K Palaniswami on 11 November. His convoy was leaving the Government Thoothukudi Medical College Hospital premises after inauguration of ‘Liner Accelerator’ facility at the cancer care center. Mareeswari from Muthiapuram, who has a disability, waited for the minister holding a paper in which her grievances were written. Palaniswami who spotted Mareeswari not just stopped his convoy to speak to her, but also assured her a government job. It is not easy to get a job assurance from head of the state. Mareeswari’s luck is being discussed on social media along with Palaniswami’s kind-heartedness to help a woman with a disability live a dignified and independent life.

A happy ending to Mareeswari’s hardships

Mareeswari was being carried by another person when Palaniswami’s convoy stopped for her. He leant to hear Mareeswari’s plight who stated that she is struggling to make ends meet in the family with the meagre salary earned by her husband. With folded hands she said that if given a job she would discharge her duties without fail.

Palaniswami, who heard Mareeswari with a smile asked her to come to the Collectorate where he had chaired a Covid meeting with officials. Mareeswari who arrived on a wheelchair was then appointed as the ‘Ward Manager’ at Thoothukudi Medical College Hospital, a government job she accepted without second thoughts. Minister for Public Health C Vijayabaskar, Minister for Information Kadambur C Raju and Collector Sandeep Nanduri were also present to witness it. Mareeswari will now get a monthly salary of Rs 15,000.

Palaniswami also took to his social media handle to share about this.

“Today when I visited Tuticorin District Government Program, I kindly considered the request given by a disabled woman on the road and immediately submitted the appointment order to a motherly abled woman at the District Collector’s office”, said his post which received a lot of love from people not just in Tamil Nadu, but across India.

Mareeswari was lucky but this sheer luck is limited. There are thousands of people with disabilities in the state who are struggling to get through each day due to lack of finances or jobs to support themselves and their families. Apathy from government officials and inability to knock doors of offices always adds to their woes.