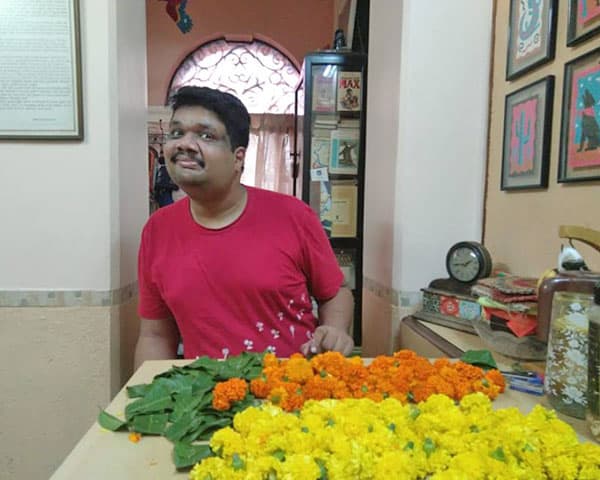 Kabir Kumtha loves to make flower garlands and torans. Recently this young entrepreneur was joined by two more young adults with disabilities to form a team. They call themselves Kabir’s Kreations and are making beautiful flower garlands for the upcoming festive season.

One of the best things about Diwali is decking up your home with loved ones. Shining lights and flower garlands enhance beauty of the festive season. For 27 year old Kabir Kumtha from South Mumbai, making exclusive flower garlands, popularly called as ‘torans’ and ‘haars’ is something that he loves to engage in. This youngster makes them mostly from his favourite marigold flowers. Kabir, who was diagnosed with autism, is all set for Diwali to take up more orders. Earlier this year, he had expanded his team with two more young adults with disabilities joining in. Kabir’s Kreations is already a hit on Facebook. Their products have also been sold across the globe including in America, Germany and Australia.

Kabir’s mother Parul Kumtha remembers how her son met with an accident when he was hardly four years old when he fell from a forty feet height while at his day care centre. Apart from the multiple fracture he had, Kabir was in coma for over ten days. When he woke up, he was different. The hit had a deep and terrible impact on his brain and development. Though Kabir attended a regular school until the age of seven, he was later shifted to a special school.

When doctors told me that Kabir is going to be under autism spectrum disorder, I did not know what it was. But I decided to know about it little by little and even today, it is a learning experience for me. Sometime back, Kabir got an order from a friend to make flower garlands and they even insisted on paying him. That is when we decided to think about this seriously. Now, ‘Kabir’s Kreations’ is doing well.- Parul Kumtha, Kabir’s mother

Soon, Kabir and Parul decided to expand their venture when two more young adults with disabilities joined in. Parul says, “All the three families gave them money to start a business, more like an investment. With that minimal amount, they got raw materials to make ‘torans’. We told them that the money has to be repaid once they start doing well in their business. In a few months, they started paying back”.

Festival seasons are always busy for Kabir and his team, especially Diwali. The team is busy throughout the week and already have a handful of orders. Each of them makes up to five garlands a day. “We are not looking into profits and hence do not want to make many”, says Parul, “We want to make a social connect”. Apart from making beautiful flower garlands, Kabir and his team also makes newspaper bags and other products including spectacle chains, bracelets, pickles and peanut butter. The team is taking it slow and steady!

‘Kabir’s Kreations’ has a lot of positive comments on Facebook. “I love all the beautiful creations. The torans, spectacle chains and rakhis. I appreciate their devotion and perseverance. Truly commendable”, says Vanitha Kumta.