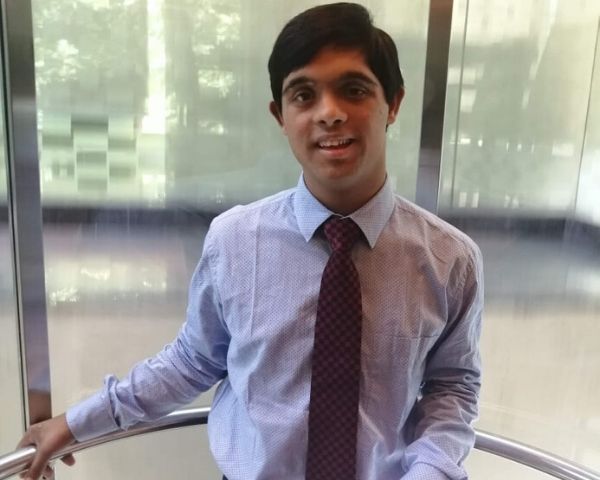 Sahil Singh, a 23-year-old advocate of Down syndrome from Lucknow, is busy giving the final touches to the speech he will be making on the occasion of World Down Syndrome Day at the United Nations. The Coronavirus scare has put an end to his Geneva travel plans. Instead Sahil will record his speech on video.

When Sahil Singh decides to do something, he does it, regardless of what his parents or the world at large may say. That confidence and attitude makes this 23-year-old from Lucknow a fitting symbol of the theme We Decide adopted by the United Nations (UN) for World Down Syndrome Day 2020.

Sahil is among three people with Down syndrome from India selected by the UN to speak in Geneva later this month. He was scheduled to travel there with mom Dr Bhawna Singh until the Coronavirus pandemic led to a last-minute change of plan. The function will be held as a virtual event on 20 March and Sahil is busy putting the final touches to his speech.

The theme this year is We Decide and that sums up my life so far. I wanted to study until class 12 like my brother but my parents were not sure I could do it. I worked hard and passed class 12 and showed my parents I could do it. Same with my love for cricket. These are things I will talk about and I want my speech to go viral! – Sahil Singh, Down syndrome advocate

This go getting, confidence defines everything Sahil does. A Special Olympics National Champion since 2005, he has won medals in athletics, swimming, cricket, basketball, and volleyball at an individual level and for his state. He is a regular presence at all sports camps held at district, state and national levels.

Sahil has also made his mark in international events like the 2013 Special Olympics Asia-Pacific Regional Games in Newcastle, Australia where he won a silver medal in aquatics 50m free style. As a Youth Leader for the Special Olympics Unified Schools and Special Olympics Bharat, he promotes inclusion via unified sports and group activities.

The credit for these incredible achievements goes in substantial measure to the attitude Sahil’s parents, Dr Bhawna and Rajneesh Singh, adopted towards his disability.

“Sahil was born at the All India Institute of Medical Sciences in New Delhi where we were both practising at the time”, says Bhawna, a specialist in obstetrics and gynaecology. “There was a lot of ignorance at the time even among paediatricians, but we did not lose hope. We knew that early intervention helps children with Down syndrome achieve their milestones and connect well with peers. I started working on his speech, cognition, etc along with experts and that worked”.

The Singhs’ were determined to ensure Sahil studied in a mainstream school. They moved to Lucknow and enrolled him in Study Hall, the only set up to practice integrated education. Side by side they attended conferences on Down syndrome and connected with other empowered parents. At one such conference in 2019 Sahil spoke about his journey and that opened the door to the UN event.

In his UN speech, Sahil plans to talk about his single-minded determination to pursue his goals. “Like his passion for cricket”, says Bhawna. “He loves the game so much that he wanted to take it up professionally, but we were not sure that the team would accept him”. Sahil persisted and he is now training at a cricket academy in Lucknow. Ditto with higher studies. He found an open school where he could study one subject at a time and took his class 12 exams. Now he has plans to go to college. “He will talk about the decisions he has made and how everyone has the right to decide for themselves”, adds Bhawna.

Sahil currently works as an Assistant Coach in Special Olympics Sports and Yoga at Study Hall. “He wants to be a rock star” says Bhawna, the pride evident in her voice. “He wants to shine all over the world”.

Shine on Sahil. The world is watching you.