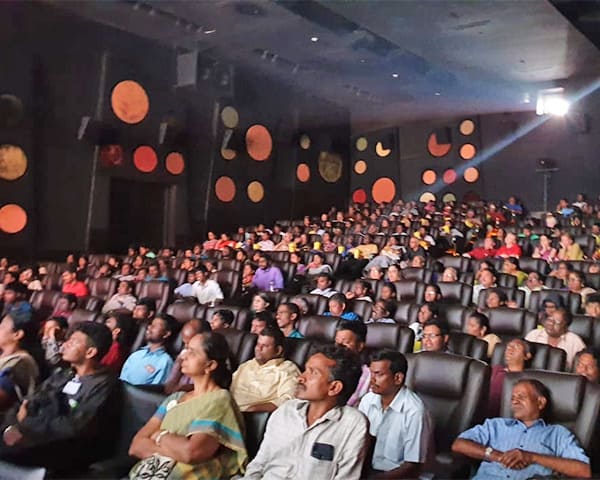 The eighth edition of Ability Fest 2019 held in Chennai was a platform for film enthusiasts to come together. Fifty disability-related movies from across the world were screened at Sathyam Cinemas and received a grand round of applause. Organisers are partnering with international film festivals to ensure that more films are screened in years to come.

The eighth edition of Ability Fest 2019 held recently in Chennai was truly a sight to behold. Conducted by the NGO Ability Foundation that works with the disabled community, the event brought together film enthusiasts and filmmakers from across the world. Hundreds of people participated in the event which was a grand success. The 50 movies screened at Sathyam Cinemas highlighted the disability space in different ways.

The festival was started in 2005 and actor-director Revathi was part of the team that spearheaded the project. The late eminent film scholar P R Nair was also part of the original team. The four-day event was free to attend for the public.

Janaki Pillai, Programme Co-ordinator says the programme was appreciated by everyone.

We know that cinema is a powerful medium to reach out to the masses and Indians love movies. So we decided why not focus on it to spread the message about disability awareness? All our movies are about people with disabilities, the many struggles that they undergo and different inspiring stories. In some of the movies that we chose, actors are also people with disabilities and that is something that we much appreciate for our screenings. – Janaki Pillai, Programme Co-ordinator, Ability Foundation.

Movies from across 18 countries were screened. “Sad, funny and drama movies were screened”, says Janaki. “The whole point was to make the audience think when they watch a movie. We also wanted to spread the message of having accessible cinema halls. All the four screens had wheelchair ramps. The movies had audio descriptions and subtitle captions too. That way, people with all kinds of disabilities could access it”.

People with different disabilities were present at the event. Youngsters with cerebral palsy, Down syndrome and intellectual disabilities enjoyed the movies that were screened. The organisers are now in contact with other disability related film fests from across the world. “This is all about cinema by, with and for people with disabilities”, adds Janaki.

Blockbuster Tamil movie Viswasam starring superstar Ajith was among the movies that were screened. The film’s director Siva was also present and loved the response. “Having such descriptive audios is definitely a great concept. I will definitely introduce this into theatre settings for my upcoming movies too”, he says,