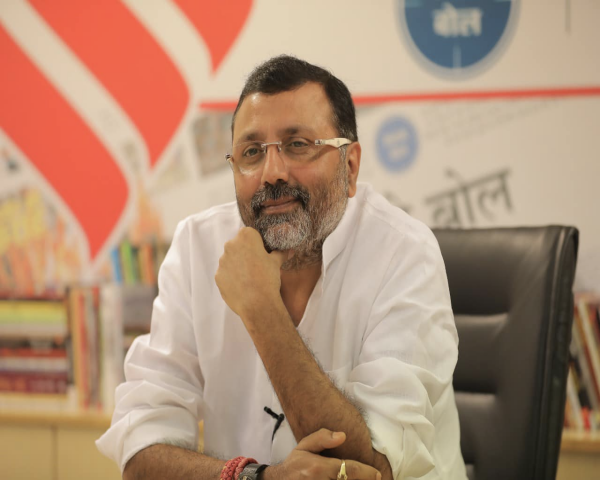 The district administration at Jamtara in Jharkhand has filed an FIR against BJP MP Nishkant Dubey. Based on a complaint filed by a group of disabled people, the Election Commission of India directed local authorities to take action.

“Whosoever the BJP fields, be it a handicap, thief, dacoit or a rogue, we must support that candidate”. This was the callous and insensitive remark made by Nishikant Dubey, a senior BJP MP from Godda, Jharkhand on the campaign trail that has finally got the Election Commission of India (ECI) to take action.

Based on a complaint filed by a group of disabled people, the ECI directed the district administration to lodge an FIR. The letter was forwarded by the Deputy Commissioner Ganesh Kumar to Sudhir Kumar, the sub-divisional officer (SDO) asking him to take action in this regard.

Speaking to the media, the SDO said, “Godda MP had made a statement in public against the disabled following which the matter was brought to the notice of the of Election Commission by a group of disabled persons and finally the matter was handed over to me”. Action will be taken under relevant sections of the Indian Penal Code.

When it comes to people with disabilities, its open season for Indian politicians. Leaders across parties have called their opponents schizophrenic, bipolar, lame, blind, etc. Few political leaders have been challenged on this, although Section 92(a) of the Rights of Persons with Disabilities (RPWD) Act, 2016 provides for imprisonment in the case of disability abuse.

Soon after Dubey’s statements were reported disability rights leader Dr Satendra Singh had written a strongly worded letter to the EC listing the abusive comments made so far and urged for intervention. By not taking action, the EC, he said, is responsible for perpetuating the apathy and stereotype.

The conduct of elected MPs like Mr Dubey inflict greater individual and societal harm, distinct emotional harm, and may incite community unrest. I earlier complained to the Uttar Pradesh State Commissioner (Disabilities) in Satyadev Pachauri’s case, the Chief Commissioner in Babul Supriyo’s case and now to the ECI about cases mocking disabled people since general elections, legislative elections in UP, Tamil Nadu and now Jharkhand. The ECI and lawmakers must prove their accountability towards such incidents if they really believe in sabka saath, sabka, vikas, sabka vishwas dictum. – Dr Satendra Singh, Disability rights leader

The ECI action, hopes Smitha Sadashivan of the Disability Rights Alliance, will force political leaders to mind their language.

“I had filed an FIR against M K Alagiri of the DMK before the Lok Sabha elections. The inspector gave me a call after the elections, said he would come over to meet me and then no action. Others have also filed an FIR before me but no action was taken on their police complaints”.

As public figures, it is important for politicians to set examples, she adds. “They need to be responsible role models for others and should say only the right things as many people listen and follow them. They can’t give negative information and messages about a group of people. And they are also not in cognisance that their messages against persons with disabilities are unlawful and punitive under the RPWD Act 2016”.