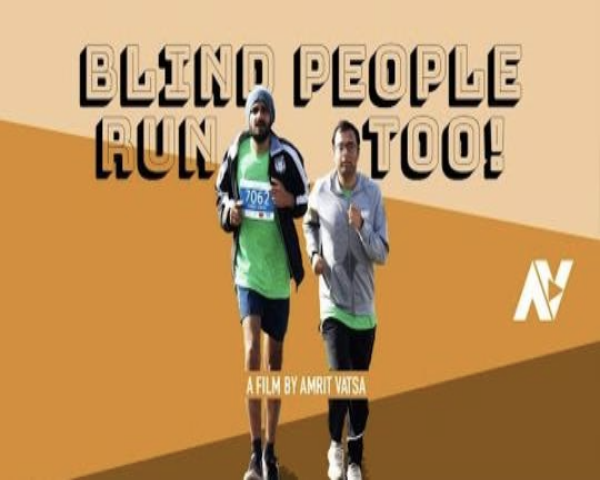 Blind People Run Too! That’s the title of a film made on visually impaired marathoner Vineet Saraiwala’s Ladakh Marathon in 2018. Filmmaker and Vineet’s running partner Amrit Vatsa has captured the funny moments and the excitement quite vividly.

Candid opening reactions like these start off Blind People Run Too! , a film that captures visually impaired marathoner Vineet Saraiwala’s mission to run the Ladakh Marathon in 2018.

The fun, sweat, and grit is captured vividly by Vineet’s running partner and filmmaker Amrit Vatsa. The two met became good friends after they met a few years ago at an event organised by Adventure Beyond Barriers Foundation. The idea of making a film on their Ladakh experience is something they both felt strongly about.

The film has been carefully planned and put together but that doesn’t take away from the spontaneity, even wackiness of the project. The sense of unpredictability comes through in the camera movements and conversations the two strike up, be it with a cab driver or a foreigner who is baffled how a blind person can run.

I am happy that Amrit has captured the essence. Whenever a person with disability achieves any milestone, the media tends to glorify it which is utterly baseless. Like I am told I am an inspiration just because I am visually impaired and a runner. The time has come to normalise disability and view it from only one lens, that of being a human without a lens of sympathy, inspiration or motivation. This is a feel good, fun movie and I believe no one better than Amrit could have done justice to the values I hold dear by demystifying disability and recognising people for their ability. – Vineet Saraiwala, Inclusion professional

Vineet and Amrit also hope that the film will encourage visually impaired people to take up running. Just how unthinkable the notion of blind people running is to the larger public comes through effectively. “After the marathon, we had two days and we shot with people on the streets and captured candid reactions when we told them blind people can run”, says Amrit. “To our astonishment, many said they could not even imagine that.

Vineet runs with the help of a tether, something the film focuses on. Blind People Run Too! , hopes Vineet will motivate visually impaired people to embrace a more outdoorsy life.

“To visually impaired people, we wanted to introduce the tether which is an efficient way of running as against holding hands with the partner. People can know and start running outside their comfort zone, so this is an attempt to raise awareness about outdoor sports and outdoor activities”.

Amrit and Vineet have plans to screen the film at blind schools across India and speak to students about their experiences to spread this thought.

Watch Blind People Run Too! By clicking this link