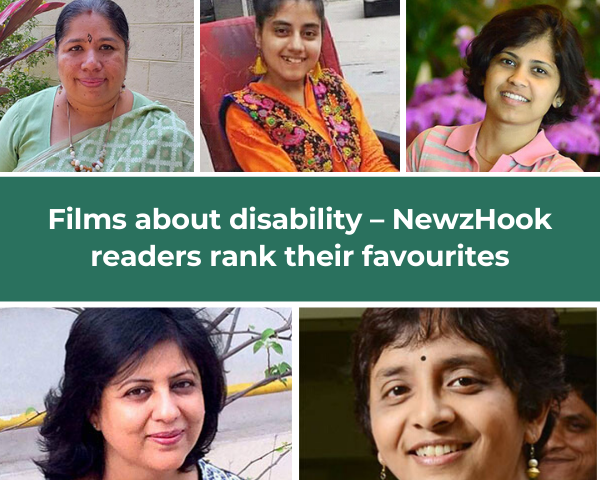 The 92nd Academy Awards are near. A time to celebrate the best in films around the world in the year gone by. Over the years disability and disabled people are making their presence felt increasingly. Some get it right, many do not. In the run up to this year’s Academy Awards, we ask our readers to rate their favourite films on disability.

“Margarita with a Straw is the most progressive film made focusing the sexual needs of people with disabilities. The protagonist is a beautiful young woman studying in college. She watches porn online and indulges in self pleasure. However, she needs a partner to make her feel like a woman, to fondle, cuddle, and love her. She’s heartbroken when her bandmate refuses her proposal probably because of her reduced mobility and speech. She moves to the United States to get over this and explores many layers of sexuality. She finds a woman partner with visual impairment and also has a chance encounter with her classmate. Interestingly, she discovers she is a homosexual”.

What is Eating Gilbert Grape?

“The soul stirring backdrop of the movie is the struggle of Gilbert Grape to find love and reflects the balance between the duties towards a special sibling and attempts to find normalcy in relations based on love and companionship. The scenario is so real, perhaps, for many people with neuro diverse siblings. Gilbert Grape deals with the aftermath of his father’s suicide, his mother’s struggle with obesity and above all, his brother’s autism and it leaves little scope for his love life to blossom”.

“The dilemma of finding his brother in the bathtub until the next morning because there was no further instruction from him as he steals moments with his love interest is intensely heart wrenching. While there are bleak moments, bordering on an all-pervasive pessimism and sadness, the movie also promises that one learns to have and nurture relations ‘with’ neuro diversity in the family, not ‘in spite of’ it. The fact that Gilbert’s love interest Becky shows so much concern towards the special sibling Arnie and contributes to his well being is, indeed, the most promising part of the movie. As a parent of a neuro diverse and a neuro typical sibling duo, this promise and hope in the movie left a mark in my mind as I navigated in my mind the possibilities in the labyrinths of love and relations with familial relations where there is neuro diversity”.

The sexual preferences are portrayed very naturally. This is a new content for Indian audience since they believe that people with disabilities, especially women are asexual. It is surprising to them that they too have bodily needs. This movie has been successful in breaking such stereotypes and withholds the dignity and individuality of people with disabilities.

Movies that stood out for their realism & sensitivity

“Margarita with a Straw is first Indian film to talk about love and sexuality of people with disabilities. I love the movie because I believe that being in love is everybody’s right”.

“I loved Barfi just because it was an entertaining movie. It was sweet, innocent and maybe there were things copied from other movies but I felt Ranbir Kapoor was amazing in it. I loved Iqbal for the beautiful story and the songs. The portrayal by Shreyas Talpade was innocent and lovely. There is one scene I liked from Kaabil, where Hrithik Roshan is shown multitasking and that scene was real. I liked Ship Of Theseus where this girl who is blind and is a photographer is shown like how anybody would behave”.

“My all time favourite is Forest Gump. Tom Hanks of course did a smashing job and my favourite quote from the movie is “My mama always said, ‘Life is like a box of chocolates. You never know what you’re gonna get./You have to do the best with what God gave you’”

The way his disability has been projected as something normal (it is never defined with any label in the film) and how he has not “great special” skill but his simplicity itself is his superpower, the only thing he likes to do is run, and run he does. It’s not a race or a cause but just simply runs is somehow symbolic of not trying to fit our persons with intellectual disability in the rat race but prepare them for the slow ambling of Life itself. That is what I hope to do for my son and those like him”.