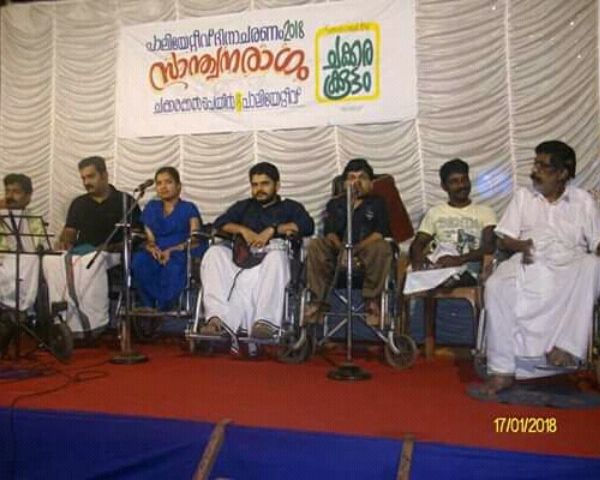 ‘FLY Music’ is a music troupe started by a group of wheelchair users who are part of the Kerala based organization FLY that empowers people with disabilities. The seven member team sings to Karaoke music and has performed at over 65 venues across Kerala. The Coronavirus crisis and lockdown has affected their work, but the team hope for better days.

Music is indeed therapy, something that calms down the mind. For a group of people with disabilities from Kerala, music is something that has given them liberation and freedom from years of spending inside the four walls of their home. ‘FLY Music’, based at Kannur, is a wheelchair music troupe with seven members. They have performed at various venues, mainly in the north of Kerala. The lockdown and Coronavirus crisis has affected their work, but they are determined not to give up.

37-year-old Prajeesh was diagnosed with Spinal Muscular Dystrophy (SMD) and started using a wheelchair almost ten years back. He has never attended school due to a disability and mobility issues. He started showing symptoms of SMD when he was as early as four years of age, due to which he was confined inside his home. Prajeesh couldn’t walk, and used to drag himself on the floor.

There were days when Prajeesh wished he could attend school like other children of his age. As he grew up, he felt his life had come to a standstill. There was nothing to look forward.

“I had lost all hopes. I felt my life was going to be confined inside the four walls of my home forever. That is when I became part of FLY for disabled people. They try to promote inclusion. There, I met many people like me and that helped me change my attitude forever. I became a more positive person”, recollects Prajeesh who is also a singer. Today, Prajeesh is one of the leading singers of ‘FLY Music’.

The organization FLY was started in the year 2006 with the sole objective of empowering people with disabilities. They introduced various programs to promote inclusion. Team FLY also held a few camps in various parts of Kerala. Singers from FLY used to sing at these camps and also received a lot of appreciation for their performances. That is how they decided to start an exclusive music troupe, one of the best decisions made by FLY.

‘FLY Music’ performed their first formal event on 15 August 2013, Independence Day. All the members at ‘FLY Music’ sing to Karaoke music. There are no instruments used in the stage. The team has already performed at over 65 venues in Vadakara, Kannur, Kasargod and Kozhikode to name a few.

“Forming a music troupe and performing at venues has boosted the confidence of all our members who are disabled. We are getting more invites to perform. All the seven singers in our team are extremely talented”, says Rajeevan, Chairman, FLY.

What is surprising is that none of the singers have formally learnt music. They have all learnt the art form in their own ways, either by listening to other singers or learning from mobile phones. The troupe has been getting paid for their performances. “Our singers are able to ascertain their identities. We know that we can sing, perform and help the crowd enjoy, just like how a person without disability does”, says Rajeevan.

‘FLY Music’ received their biggest break in the year 2018 when they appeared in the famous ‘Comedy Ulsavam’, a show in Malayalam channel Flowers TV. More people started noticing the team. That means more opportunities!

The challenges faced by members of FLY Music are many. Transport is one amongst them. Each member needs an exclusive vehicle to carry their wheelchair and reach the venue. The expenses for that can also be tough on most of them.

Rajeevan says that there are many aspiring singers with disabilities who come forward asking for chances to be part of the troupe. “We want to include them but we have many limitations and constraints. I hope in days to come, we can make the troupe bigger so that more people can join”, he says.

Kavita Biju, one of the singers of ‘FLY Music’ has been a part of the troupe ever since they formed. Kavita who hails from Kannur says that being part of the venture has changed her life. “I learn music from my mobile phone. Being part of FLY has changed my life in the most beautiful manner. It has boosted my confidence. I also feel happy when people point out my positives and negatives as a singer”, she says.