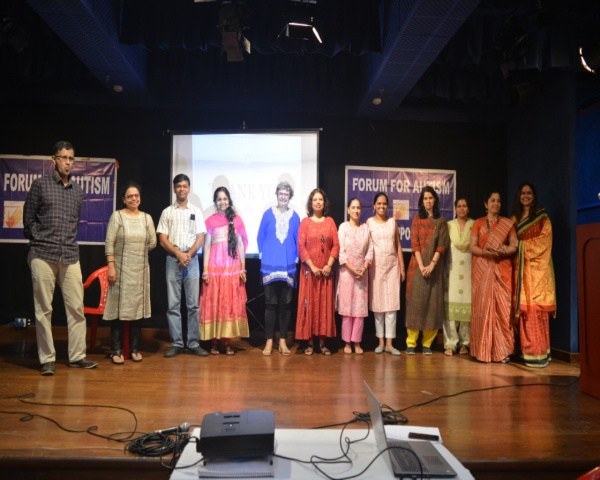 Forum for Autism, the well-known Mumbai-based parent support group, felicitated important milestones by children and youth with autism at a ceremony in Mumbai. The highlight was the insights shared by achievers with autism about their journeys, which held valuable learnings too.

“Identify your child’s strengths and use them to open up their world. Keep your expectations high as people with autism are capable of anything. And give them responsibilities, however small”.

Extracts from 17-year-old Ayush Ganjoo’s speech that were met with a loud and resounding applause by everyone present at the Forum For Autism’s annual event celebrating achievements and achievers of the year.

Autism self-advocate Ayush was among the 20 children and young adults whose achievements, ranging from the academic to the extra curricular, were celebrated. Nine of those honoured have cleared classes 10 and 12, two have finished graduation, three are emerging entrepreneurs, while six are making their presence felt in non-academic fields.

Some of those felicitated like Maitreya Matale showcased their singing skills too. This is the second time Maitreya was being recognised. Last year it was for being a part of the 6 Pack Band 2.0, a music band made up of children with disabilities. This year, it was for scoring 66.8% in his class 10 exams.

This year Maitreya sang the song Bum Bum Bole onstage. This was such a lovely way to felicitate the children and it meant a lot to my son. He got a platform to sing and he was extremely comfortable there because he knew all the people around and felt loved and supported. The fact that he was honoured for his academic achievements meant a lot to him as he has been deprived of medals and certificates. Though he studies consistently, he has faced negative remarks, so this occasion was very important. – Asha Matale, Parent

Each achiever with autism received a medal and certificate of appreciation watched by cheering family members and friends. Compering the event were two young adults on the spectrum.

“It was very nice gesture of FFA to felicitate young adults with autism who have worked hard to achieve something in spite of their difficulties”, said Nirupama Bhatia, whose son Rishabh was also felicitated for finishing his bachelor’s degree in computer applications. “It was not like just any prize distribution ceremony, our young adults performed and entertained us too”.

A parent support group, Forum for Autism (FFA) has been working in the field of Autism Spectrum Disorder (ASD) for the last two decades. FFA believes in empowering individuals with autism and the family too.

“We are encouraging the youth to create their own start-ups”, says Priyanka Chiplunkar, Assistant, FFA. “Many of them have started their own ventures, like chocolate-making. We have 750 members, but the awards are open to all. The only condition is that the child/adult should be on the spectrum”.

The chief guest at the event was Vineet Saraiwala, Inclusion Lead at Big Bazaar, an organisation that is consistently raising the bar when it comes to embracing and promoting workplace inclusion.

“The event was a great platform for Individuals to showcase their talents and when parents of children with ASD see Individuals pursuing photography, filmmaking, singing, dancing, or cooking, it gives them hope and immense confidence in their children. It makes them reach out to the FFA network for support. This graduation ceremony will boost the confidence of the students and act as a catalyst for a change in mindsets”.

For Paromita Mazumdar, whose son Deep was honoured for outstanding life skills, the occasion was one filled with deep emotion.

“Deep has not done his academics and followed the traditional road as he has moderate to severe autism. To see him being recognised for outstanding life skills was a proud moment because life skills is as important as academics. Deep cannot express himself but the smile on his face when his name was called out said it all. When he came off stage and gave me the medal, I felt all the struggles we went through was worth it”.