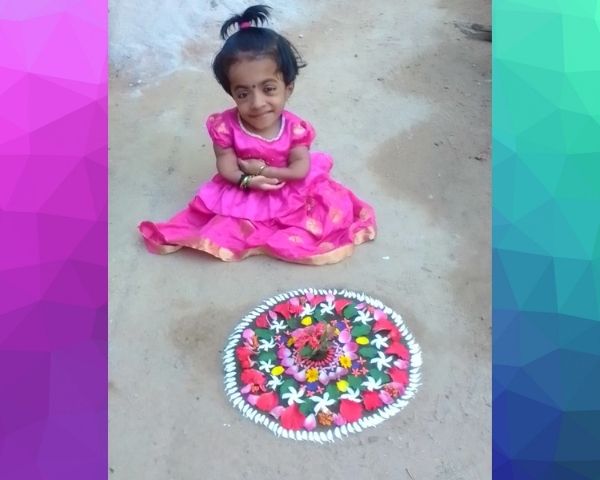 14 November is celebrated as Children’s Day across India. In our month long series #FutureChamps, we bring to you stories of children with disabilities who have beaten their physical limitations to choose happiness in life to set an example for adults too. Read story of nine-year-old Mrudu from Trivandrum who was diagnosed with Brittle Bone Disease.

Mrudu is always smiling. She is happy in her own world comprising mainly of art. This nine-year-old was diagnosed with Brittle Bone Disease a few hours after birth. Due to her condition, Mrudu is unable to move from her bed and needs support from one of her parents. Unlike children of her age, she cannot run or play. But all that does not hold Mrudu back from staying positive. This powerhouse of energy is always looking out for something to indulge in. Mrudu who is passionate about dance and music recently got involved in a new found love and art it is!

Mrudu hails from Trivandrum, capital city of Kerala. Her mother Mini remembers that when she was pregnant, final scan reports showed that the child’s legs were affected. Soon after birth, Mrudu had a fracture as well. “I still remember doctors telling me about her condition and how I must touch her like touching a flower because she was very sensitive”, says Mini.

Mrudu spending days in the Intensive Care Unit (ICU) worried Mini and her husband. “Now I have better awareness about Brittle Bone disease, but during those days I was clueless. In fact, I had not even heard about it”, recollects Mini.

Over time, she understood what Mrudu’s needs are and reached out to her accordingly. Mini says that deciding to empower her daughter was one of the best decisions she has made till date. Mrudu’s family comprising of her parents and sister are always supportive of her.

An academically brilliant student, Mrudu is currently studying in class 5. Over past few months, due to the Covid pandemic, she hasn’t attended classes. Before that, Mini used to take her to school once in a while. Mrudu loves studying and has won prizes for her academic brilliance.

Since Mrudu spends most of the time on her bed, she has learnt to sway to tunes and shake a leg being while lying down on her bed. She loves singing too and finds happiness in art.

With Mini’s help, Mrudu has started drawing and painting. “She keeps telling that she wants to learn magic someday. We are always in to support her in all her dreams. Since she is too young, we are waiting to hear what she wants to become in life”, says Mini who says that drawing has helped Mrudu move her hands better. Needless to say, art therapy is something that experts have vouched for over years, especially for children with physical disabilities.

Mini says that being part of city-based NGO Amrithavarshini that empowers people with Brittle Bone disease has helped them meet more families like theirs. Mrudu could also meet more children like her. “Until being part of Amrithavarshini, I thought Mrudu was the only person with the condition. I was so ignorant”, says Mini adding, “It is always important to keep your child active. I take her wherever I go and I do not lock her inside the house. She is special in so many ways”, says Mini.