Ginny, a doll with disabilities, aims to spread the message of inclusion among kids 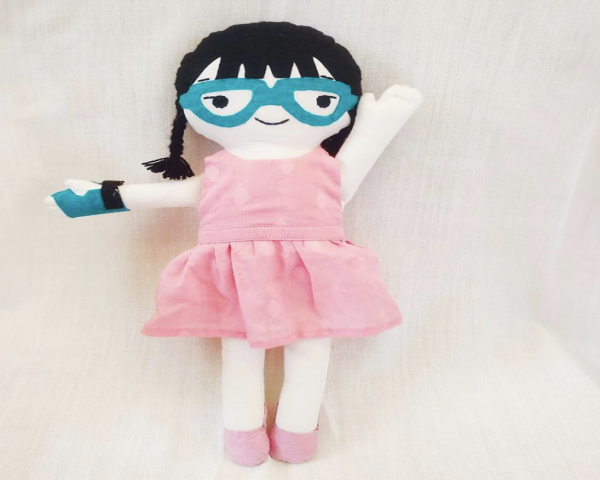 Ginny, who is four years old, wears thick glasses and has a radial club hand. This makes her different from other kids her age but she refuses to let that come in the way of all the activities around her. In case you are wondering who we are talking about, Ginny is a doll created by Shweta Verma and Jamal Siddiqui, founders of the social enterprise Ginny’s Planet who aim to trigger important conversations about inclusion among kids through stories featuring her.

Like all four-year-old girls, Ginny loves to run about and play with friends. What makes her different from other kids her age is that she was born with a radial club hand, has nine fingers, wears a brace to support her wrist and has spectacles to manage her vision problems.

Such differences make each one of us unique and life beautiful. That’s the message Shweta Verma and Jamal Siddiqui are aiming to send across to the world, especially children, through their doll, Ginny and storybooks featuring her.

Shweta and Jamal are co-founders of Ginny’s Planet, a social enterprise. The couple aim to build a planet where no one is seen as the odd-one-out on the basis of differences. They are doing this through dolls and storybooks and trainings on empathy and diversity.

Shweta, who has over 15 years of experience working in the disability sector, says the idea of using a doll came about when they were ideating on how to orient kids about inclusion.

When we were thinking about the trainings, we were also looking at how to make it interesting for kids and we realised that trainings by themselves may not be so exciting for them. That’s how dolls came into the picture. We started interviewing parents and kids and realised dolls make sense only when kids can relate to them. Ginny exists the way she does based on interviews with parents and children. The idea is that if such things exist from childhood, they help trigger conversations among kids, between them and parents and kids and teachers. – Shweta Verma, Co-founder, Ginny’s Planet

Ginny was born from a personal experience

Just how critical building such an inclusive mindset early was brought home to the couple after their son was born with a radial club hand. It’s a condition where the radius bone in the arm is missing or underdeveloped. This causes the hand to be bent towards the body.

“As parents of a child with this condition, we have experienced many insensitivities”, says Jamal. “People stare and ask odd questions and even basic things like getting a disability certificate from a government hospital takes so long and the process is often humiliating. That made us feel we should do something to change this perception”.

The choice of Ginny as a name was to make the character gender-neutral. They later changed this as writing stories with a gender-neutral figure was hard. “We finally made it a girl as being a girl with a disability in this country is a double disability”, points out Jamal.

Ginny will soon have a friend

Ginny will soon be a part of a group of friends. Early next year, a new doll called Sai, will give her company. Sai, who is male, has vitiligo, a skin condition that is visible and therefore challenging for a child.

Nayana C, who bought Ginny for her nephews, loves the concept. “My dearest nephews love Ginny. Their mother Ronita wrote to say ‘Please tell your friend that Ginny has found a forever home in my monkey-land’”.

Syed Mohammed Yunus, a New-Delhi based father of three girls, says, “Ginny started the very first conversation in my family about disability, diversity and inclusiveness. My six-year-old daughter Warda was quick to observe the design features like specs and asked a lot of questions, while nine-year-old Fatima read through the story of Ginny. This experience created a narrative which I shared with my colleagues and it further led to discussions on biases and prejudice we hold towards disabled people. I think Ginny is creating a space in this world where disability is accepted as diversity”.

The Ginny dolls and storybooks featuring her are available online. Details are at the end of this article. The dolls are handmade by women associated with Svatanya, a social enterprise that is working on empowering underprivileged women.

Buy Ginny Dolls and Storybooks on Amazon, Flipkart, and from Ginny’s Planet.