Glimpses of Onam celebrations across Kerala by disability rights groups 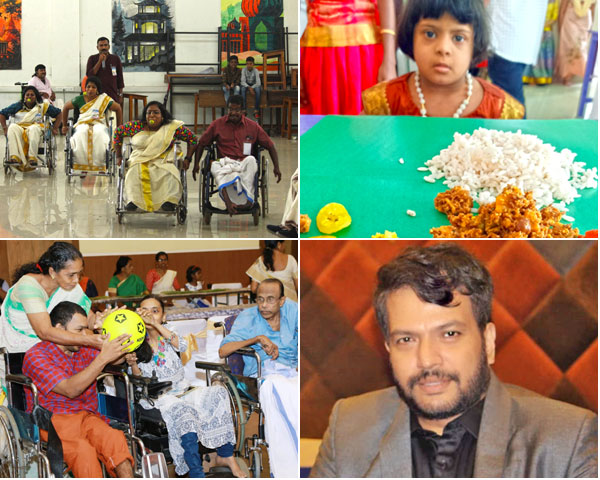 Today is Onam and across Kerala, people are celebrating in a big way. Many NGOs and organisations for people with disabilities have come together to mark the day with dance and eating traditional delicacies. Though celebrations took a backseat due to the devastating floods that hit the state last month, people are organising meet-ups in small ways.

Kerala’s biggest festival is here and many homes are filled with floral carpets and the delicious aroma of the traditional onasadya, the traditional meal served on this harvest festival. Onam is a time for friends and family members to come together and celebrate. This year celebrations are somewhat tempered due to the devastating floods that hit the state last month. Yet, NGOs and organisations marked the day in a meaningful way.

Over 100 members of the Thanal Palliative and Paraplegic Society (TPPS) came together to celebrate the day with music, games and great food on 3 September at the Abad Nucleus Mall hall, a well-known accessible place in Kochi.

Round the year, most of the wheelchair users are confined to their homes. So a celebration like Onam is a chance for everyone to come together. We shared songs, poems and most of us participated in games too. The event closed after a delicious meal. We had given all the members exclusive Onam gifts too. All of them were happy and we are looking forward for the same next year too, maybe even better. –Rajeev Palluruthy, Secretary, Thanal Palliative and Paraplegic Society

The event was mainly for wheelchair users across Kochi though people from nearby places also participated.

The Onam celebrations organised by the All Kerala Wheelchair Rights Federation (AKWRF) in the state capital Trivandrum saw more than 250 people taking part in celebrations. “There are hardly any accessible venues in Trivandrum. Till date, officials have not done anything about it. We were looking out and that is when we came across an accessible auditorium. We are glad that we chose this place because even the students actively took part in our Onam celebrations”, says Sindhu Sudevan, President, AKWRF, Trivandrum.

The event was inaugurated by Moideenkutty, Managing Director, Kerala State Handicapped Persons Welfare Corporation. The celebrations were held on 1 September.

Navajeean, one of the most prominent school for children with disabilities in Kochi celebrated by making floral carpets, music, dance and lots of food. Just like every year, this year parents took part in the event along with their children. Students showcased their talents in traditional art forms like thiruvathirakali and onappattu. Over 50 kids and their parents had a great time.

“All the children came wearing their favourite dresses. This was also a platform for the children to sing and dance to their heart’s fill. We had a beautiful floral carpet made by our special kids. Each of them thoroughly enjoyed it. We had recently moved to a new building premises and the place was new to the kids. But that did not stop them from having fun”, says Shiny Vinson, Principal, Navajeevan.

This year, children decided to serve ‘Onasadya’ to their parents and teachers. “This was a new experience to them and a chance to learn something new”, says Shiny.

Prajith Jaipal, Founder, NGO Divyang Foundation is from Kozhikode, one of the worst affected districts in floods. For over one months, he has been traveling to provide supplies and food kits to people affected by floods.

On 6 September, he took part in the Onam celebrations held by Kanivu Special School in the district. The school was started a few months back and is exclusively for children with all kinds of disabilities. Prajith’s NGO donated a wheelchair to one of the children. “I noticed that the child was using the wheelchair meant for adults. That will affect their body growth in many ways. A child needs a paediatric wheelchair, so we decided to sponsor him that as a gift for Onam”, he says.

Prajith is full of plans for the year like providing awareness classes about disabilities to both children and their parents. “We noticed that most of the parents are still unaware about their child’s disabilities and what needs to be done. Most of them don’t even know how to take care of their child. We want to make a difference to that and hence we are bringing in doctors”, says Prajith.

Over 50 children were part of the small Onam celebrations at the school. They had an interactive session and a grand ‘Onasadya’ to top it.