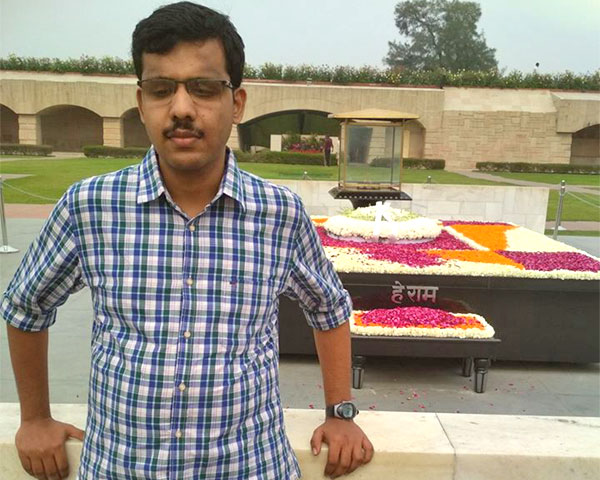 23-year-old Gokul S from Trivandrum scored 804th rank for the civil service exams of which the results came out last week. A Ph.D scholar, Gokul has a visual impairment from birth. This youngster is determined, confident and knows how to reach for the stars..

Ralph Waldo Emerson has rightly said that, ‘Once you make a decision, the universe conspires to make it happen’.

So it is in the case of 23-year-old Gokul S from Trivandrum in Kerala who scored 804th rank in the Civil Services examination of which the results came out earlier this week. Visually impaired since birth, Gokul believes that nothing is impossible, but he works for his goals day in and out.

Working towards a dream

Gokul is the only child to NCC Directorate employee Suresh Kumar GO and Shobha Kumari who works as a teacher in Trivandrum. After completing his studies from Vishwadeepthi English Medium School, Gokul opted for a BA and then an MA in English Literature from Mar Ivanios College.

According to Gokul, his IAS dreams began while studying in college. He was inspired by the handful of IAS officers who reached out to people during Kerala floods in 2018.

The dynamic IAS officials who helped rehabilitate thousands of people during the floods had a deep and profound impact on me. I admired them and was surprised at the way they helped people. That made me try out the civil services- Gokul S

According to him, the relentless support from his family is what made him pursue IAS without any hassles. “My parents never held me back. I became what I’am because of them”, adds Gokul who is currently a Ph.D scholar at the Institute of English. Karyavattom.

This was Gokul’s first attempt in writing IAS exams and he already scored a top rank. Gokul says it was clearly unplanned as he did not even attend coaching sessions. Even while pursuing his academics, Gokul spent time reading material for IAS and that is the only preparation that he did. “I’am waiting for my service allocation. If I’am not happy with what has been allocated, I might attempt the exams again. Since this was not planned, it had its shortcomings too”, says Gokul.

Thanks to accessible computer technology, Gokul can attempt what his heart desires. Not much of a Braille person, Gokul uses screen reader for his studies. With bigger goals, determination and confidence, Gokul is gearing up to soar heights.

“I believe in living in the present. Don’t think too much about the past. Do what you can and move out of your comfort zones. Then only can you get new experiences”, says Gokul.