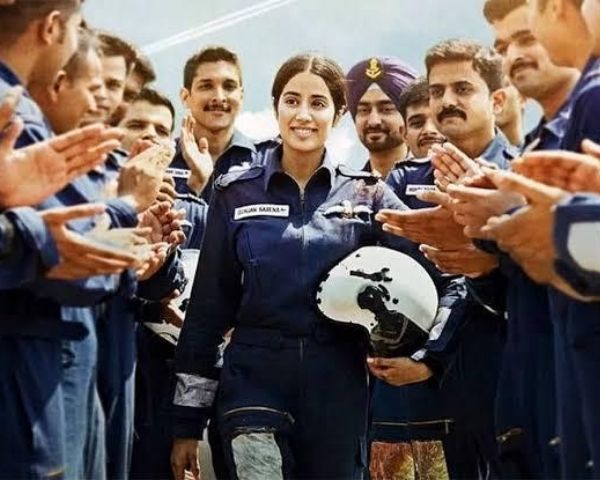 What makes a successful life story? It is not about the people who spend a lifetime trying to fit a square peg in a round hole, like most of us do and ultimately fail. But, it is about people who make an effort and fight against convention and orthodoxy to change the hole or the peg they are given and make a positive change for the generations to come after her.

Gunjan Saxena: the Kargil Girl, is a story of one such girl who fought hard against orthodoxy to become the first female fighter pilot in the Indian Air Force and who was part of Indian armed forces victory in the Kargil war.

Larger theme one of inclusion

The story is about a girl with a dream to fly planes when she grows up and fights chauvinism from a very young age for just expressing such a wish. But, Gunjan’s story is not a story of an individual fighting for making her passion her profession. It is relatable to anyone wishing or working to be included in the mainstream of the society so to speak.

You may go into this film believing that it will be a film talking about feminist advocacy or gender equality. And, the trailer and promos did strengthen that belief. Like letting us know that when Gunjan arrives at air base she is posted in they didn’t have a toilet for her and when she mentions this to her senior, she gets a snide reply that they don’t have a ladies toilet because this place is not meant for ladies. But, when we see the same thing in the context of the whole story we see that she has not entered this premises as a freeloader, but, she has come here after seeing an advertisement inviting female candidates wishing to join the Air Force. And, we see that the whole thing was some sort of a charade because they didn’t expect that someone will respond to the ad.

Haven’t we all experienced such a prejudiced attitude of the people on the ground? (The changes they make are outward; Pamela Anderson’s posters are removed from the walls, everyone is ordered to ensure that their overalls are zipped properly and some such things) No matter how people in the higher echelons are positive and proactive.

Vital issues not tackled in depth

Surely, this is a film so most of the things or incidents are compressed to fit into two hours and poetic justice is arrived at the end. So, here we have an angelic father who is the driving force behind this ambitious girl. An elder brother who is protective to the point where he can be seen as being a chauvinist (like most of his brethren becomes by the end, her commanding officer orders her to abort the mission midway in the war zone because he is worried about her safety, what if she is captured by the enemy?). A typical mother who wishes her to be a conventional homemaker as most of her tribe is.

And, some vital issues like sexual harassment are glossed over or is it that she did not face any such things? This may feel like meaningless nitpicking when the feel good factor is working in its favour. Still felt like pointing it out.

Jhanvi Kapoor looks like she was born do this role. Pankaj Tripathi as the soft spoken man who always nudges his daughter to be her best self is a dad we all wished to have while we were growing up.

In the last couple of days a controversy has erupted saying that Gunjan’s experience in the initial days wasn’t as bad as it is shown in the film. So, we also take the fact that makers would have taken a few cinematic liberties in telling this story.

Still, we cannot thank Gunjan Saxena enough for making a square hole for the square peg that she had.