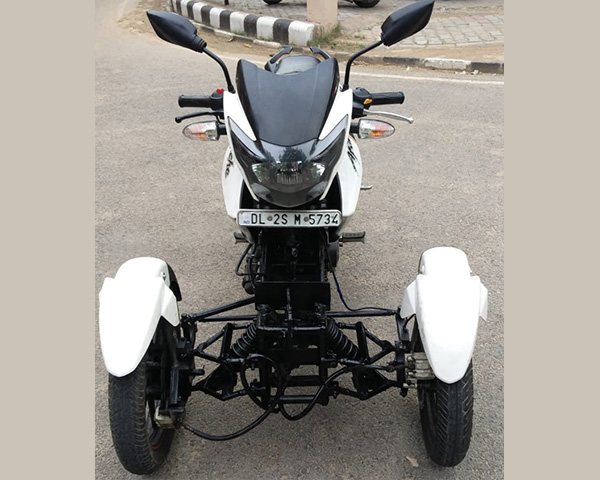 Shaken by a near accident while riding a retrofitted bike, Faisal Ashraf, who is physically disabled, decided to actively look at designing a more stable retrofitted bike. The end result is GWL 01, an inclusive bike that he developed in partnership with design engineer Tigmanshu Bhatnagar.

Passionate about motorbiking, Faisal Ashraf has been riding a retrofitted bike for 11 years. Faisal, who has a physical disability from birth, was forced to use a bike with a side wheel attachment as no company in India manufactures bikes for people with disabilities.

Then, in 2016, Faisal suffered a major scare when the side wheel of his bike broke off. He decided to stop riding that bike and discussed the problem with Tigmanshu Bhatnagar, who was then guest faculty at the Indian Institute of Technology, Delhi (IIT-D)’s department of design. Tigmanshu is deeply invested in assistive technologies and has designed a device for people with spastic quadriplegia. “We realised that a lot of disabled people are using a very dangerous system and that there was no solution”, adds Faisal.

They brainstormed and came up with a reverse trike, a motorbike with two wheels in the front and one at the back. These are a common sight in the United States.

“We bought an old bike and customised it”, says Faisal. The attempt was successful. The bike was stable and looked good. They decided to modify another bike, an Apache RTR, a TVS model. “This looked really good, offered great stability and safety and attracted a lot of attention when we took it out”, recalls Faisal.

Faisal and Tigmanshu displayed the bike at the Red Brick Summit at the Indian Institute of Management, Ahmedabad (IIM-A). The bike, which they have named GWL 01, attracted much excitement with people asking questions about the launch. GWL stands for Glad Wheel Life and 01 is because this is the first bike they have designed.

The primary drawback with retrofitted bikes is they are not engineered properly. A lot of adaptations are made to bring the motorcycle gear to the hand. These adaptations make the bike stand out and highlight the user as a disabled person who needs special attention. It devalues the excitement and pride of owning a bike and this kind of stigmatisation is widely prevalent in India. – Tigmanshu Bhatnagar, Ph.D. student, University College, London

Faisal and Tigmanshu were also clear that to make a break into the auto market they needed to come up with a product that people with and without disabilities could use. Along side they did a pan-India survey among disabled people about available retrofitted bikes. “91% said they were not happy with what is available and want something new”, says Faisal

GWL 01 has been tested widely among people of different disability types. “The feedback has been ‘wow!’ Everyone said that the balance, control, look and comfort is great. People felt safe”, claims Faisal. “People with disabilities find it stronger and stable as they can see the two wheels in front and can manoeuvre it in traffic”, adds Tigmanshu. “The braking system is also much better”.

Since they were always clear they wanted to launch it in the market, Faisal and Tigmanshu have invested a lot of time on the aesthetics and industrial design. The go to market stage, will however, take some time as Tigmanshu is currently doing his Ph.D. in designing for people with disabilities in a London university. Faisal works with v-shesh Learning Services in New Delhi.

But if want to take a sneak preview of how GWL 01 looks on the road, take a look at this video.