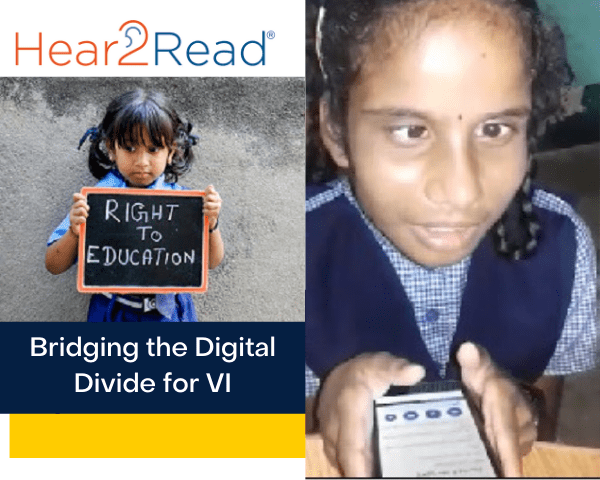 Hear2Read, is a non- profit initiative, which uses Text to Speech (TTS) software to convert displayed text (on a PC or Smartphone or tablet) into audio. The text  can be “read” from web pages, email, TXT file, Word or Excel or Googledoc or an eBook. The person behind this empowering initiative is Suresh Bazaj, a silicon valley entrepreneur who started Hear2Read in 2013.

As a tech entrepreneur in Silicon Valley, Suresh Bazaj has often met people who are blind or have visual impairment and have achieved great success in the industry. Whenever he meets them he thinks of the Poddar School for Blind Boys in Varanasi where he grew up. Hardly any of the students from the school ever went to college or found good jobs. Most ended up with some low paying manual job and depended on Government for assistance to live.

Its not that Visually Impaired people cannot think just because they don’t have a good eyesight. The big problem is lack of equal education. Very few visually impaired people get the same education as the sighted population.” Suresh Bazaj

Bazaj has worked closely with many institutions in India that serve the visually impaired population for testing the software and making sure that it useable for reading content in various Indic languages. Most of these institutions are member of the Daisy Forum of India (DFI).

TTS Apps work by speaking the text on the screen such that a Visually Impaired (VI) person can read by listening. This is often referred to as “Reading without Seeing”. The exact method depends on the device and screen reading software options for the device.

All Android devices include Talkback feature designed for VI users. On Windows PCs, most VI users rely on the open source software NVDA. Both Talkback and NVDA work with TTS software selected by the user for speaking the text on the screen.

“Hear2Read software has been a ‘game changer’ for persons with blindness in India. It is a rare example of transitional research to build a usable product using open source TTS software, for Indic regional languages”, said Ashoka Fellow Dipendra Manocha, Director of DAISY Consortium for Developing Countries program and President DAISY Forum of India.

“Hear2Read has made a tremendous contribution by helping Visually Impaired to be able to read regional language (such as Punjabi, Gujarati) content on Windows PCs and Daisy readers. Good quality TTS software to read regional language content was close to nothing before Hear2Read. By providing it free, it is helping thousands of Visually Impaired persons in India to pursue their academic career and explore new possibilities of employment. Knowledge is a fundamental right and unavailability of a text to speech engine made it very difficult for readers of many vernacular languages in India to gain meaningful knowledge at par with their sighted counterparts.”, said disability expert Dr. Homiyar Mobedji, Program Manager for Asia and Africa at Benetech.

Hear2Read received the coveted NCPEDP-Mphasis Universal Design Awards in 2017. To date about 90,000 unique users have installed Hear2Read Apps on Android devices. In addition, it is being used on more 1,000 Windows PCs and several thousand Daisy players.

You can learn more about this initiative at https://hear2read.org/

Check out this video: